After a Suicide Attempt, the Risk of Another Try (7 November 2016) 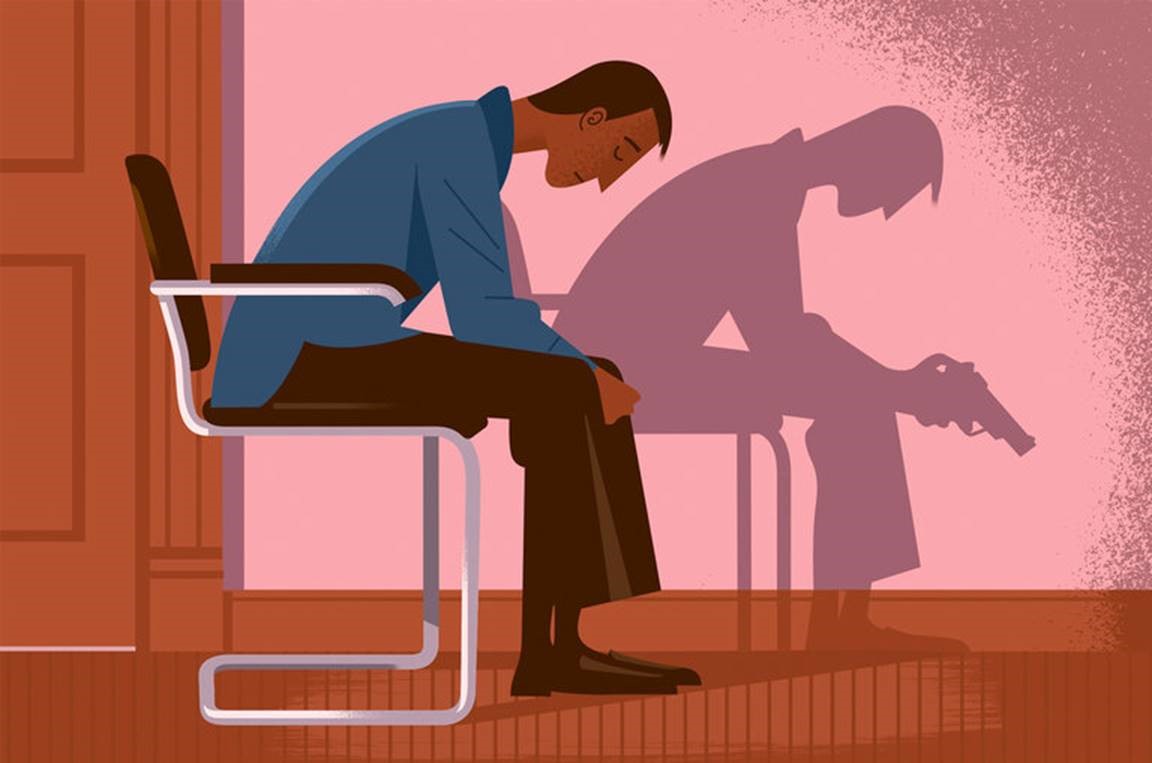 My family is no stranger to suicide and suicide attempts, and we are not alone. To recount just two instances:

A 20-year-old nephew, after receiving a very caring letter from his sister-in-law explaining why she could not be his lover, went to his room, shot himself in the head and died.

A beloved uncle, who had been plagued for years by bouts of severe depression that alternated with mild mania, was seen at a major hospital psychiatric clinic on a Friday and told to come back on Monday. Instead, he took every pill in the house and lay down on a rock jetty in the ocean waiting to die. Luckily, he was found alive by the police, and after hospitalization, a proper diagnosis and treatment for bipolar disorder, he lived into his 80s.

Suicide surpasses homicide in this country. Every 13 minutes someone in the United States dies by his own hand, making suicide the nation’s 10th leading cause of death over all (42,773 deaths in 2015), but second among those aged 15 to 34. Among children aged 10 to 14, the suicide rate has caught up to the death rate from traffic accidents.

Many times that number – more than a million adults and 8 percent of high school students — attempt suicide each year, according to the Centers for Disease Control and Prevention. Yet a woeful minority receive the kind of treatment and attention needed to keep them from repeating a suicide attempt.

A common yet highly inaccurate belief is that people who survive a suicide attempt are unlikely to try again. In fact, just the opposite is true. Within the first three months to a year following a suicide attempt, people are at highest risk of a second attempt — and this time perhaps succeeding.

A recent analysis of studies that examined successful suicides among those who made prior attempts found that one person in 25 had a fatal repeat attempt within five years.

Now a new study reveals just how lethal suicide attempts, as a risk factor for completed suicide, are. The study, led by Dr. J. Michael Bostwick, a psychiatrist at the Mayo Clinic, tracked all first suicide attempts in one county in Minnesota that occurred between January 1986 and December 2007 and recorded all the deaths by suicide for up to 25 years thereafter. Eighty-one of the 1,490 people who attempted suicide, or 5.4 percent, died by suicide, 48 of them in their first attempt. The findings were reported in the American Journal of Psychiatry.

When all who succeeded in killing themselves were counted, including those who died in their first attempt, the fatality rate among suicide attempters was nearly 59 percent higher than had been previously reported.

“No one had included people who died on their first recorded attempt, so it’s not in the medical literature,” Dr. Bostwick explained in an interview. “That almost two-thirds end up at the medical coroner after a first attempt is astounding. We need to rethink how we look at the data and the phenomenon of suicide. We need to know more and do more for those who will complete suicide before they get to us for any kind of help.”

The study also showed that the odds of successfully committing suicide are 140 times greater when a gun is used than for any other method. Dr. Bostwick said that most suicide attempts are “impulsive acts, and it’s critical to prevent access to tools that make impulsive attempts more deadly.

“Suicide attempters often have second thoughts, but when a method like a gun works so effectively, there’s no opportunity to reconsider,” he said.

In an accompanying editorial entitled “You seldom get a second chance with a gunshot,” Dr. Merete Nordentoft, a mental health specialist in Copenhagen, and her co-authors wrote that “a suicidal act is the result of a temporary state of the mind.” Given “the high lethality of guns,” they urged that availability should be restricted through such measures as “legal restrictions regarding permission to purchase firearms, waiting periods, safe storage, background checks and registration guidelines.” Such measures have been linked to decreased rates of firearm suicides.

“Most people who attempt suicide change their mind,” they wrote, adding that “most often, firearms do not allow for a change of mind or medical attention to arrive in time. It is, thus, alarming that 21,175 (51 percent) persons who died by suicide in the U.S. in 2013 used firearms.”

In the Minnesota study, men were more than five times as likely to die by suicide as women; they were also more likely to use a gun. However, women who used guns were as likely to die as a result as were the men.

Equally if not more important to preventing successful suicide is paying attention to premonitory signs of suicidal intent and taking appropriate action to diffuse it. People who are depressed, who abuse substances like alcohol or illegal drugs or are having serious relationship difficulties should be considered high risk, Dr. Bostwick said.

In urging practicing physicians to pay more attention to the mental health of their patients, Dr. Catherine Goertemiller Carrigan and Denis J. Lynch wrote in the Primary Care Companion Journal of Clinical Psychiatry that “over 90 percent of persons who commit suicide have diagnosable psychiatric illness at the time of death.”

Psychiatrists, too, need to pay more attention to physical ills, they wrote. “Up to 50 percent of patients with psychiatric complaints have been found to harbor unrecognized medical illnesses that may have contributed to their mental deterioration,” yet fewer than one in five psychiatrists routinely perform physical examinations.

But more often than not, family members and friends are in the best position to spot a potential suicide and take steps to head it off. In addition to depression and substance abuse, signs include making statements (verbal or written) of being better off dead; withdrawing from family and friends; feeling helpless, hopeless, enraged, trapped, excessively guilty or ashamed; losing interest in most activities; acting impulsively or recklessly; and giving away prized possessions.

Most important is to take the person or your suspicions seriously and get immediate professional help even if the person resists. Unless you are a mental health professional, don’t assume you can talk the person out of suicidal intent.

For those who attempt suicide, the chances of a subsequent suicidal death are greatly reduced if one or more follow-up appointments are scheduled, and even further reduced if the person keeps the appointments, Dr. Bostwick said.