Do you suffer from OCD? 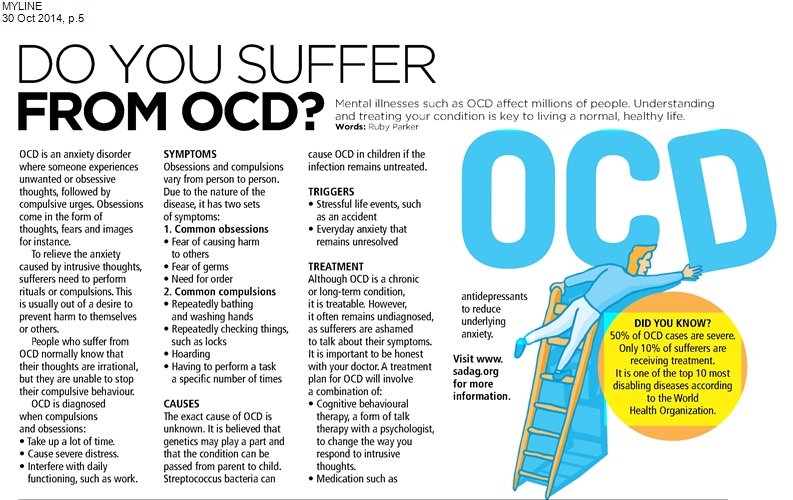 Mental illnesses such as OCD affect millions of people. Understandin and treating your condition is key to living a normal, healthy life. Words Ruby Parker OCD is an anxiety disorder where someone experiences unwanted or obsessive thoughts, followed by compulsive urges. Obsessions come in the form of thoughts, fears and images for instance. To relieve the anxiety caused by intrusive thoughts, sufferers need to perform rituals or compulsions. This is usually out of a desire to prevent harm to themselves or others. People who suffer from OCD normally know that their thoughts are irrational, but they are unable to stop their compulsive behaviour. OCD is diagnosed when compulsions and obsessions Take up a lot of time. Cause severe distress. Interfere with daily functioning, such as work. SYMPTOMS Obsessions and compulsions vary from person to person. Due to the nature of the disease, it has two sets of symptoms 1. Common obsessions Fear of causing harm to others Fear of germs Need for order 2. Common compulsions Repeatedly bathing and washing hands Repeatedly checking things, such as locks Hoarding Having to perform a task a specific number of times CAUSES The exact cause of OCD is unknown. It is believed that genetics may play a part and that the condition can be passed from parent to child. Streptococcus bacteria can cause OCD in children if the infection remains untreated. TRIGGERS Stressful life events, such as an accident Everyday anxiety that remains unresolved TREATMENT Although OCD is a chronic or long-term condition, it is treatable. However, it often remains undiagnosed, as sufferers are ashamed to talk about their symptoms. It is important to be honest with your doctor.A treatment plan for OCD will involve a combination of Cognitive behavioural therapy, a form of talk therapy with a psychologist, to change the way you respond to intrusive thoughts. Medication such as antidepressants to reduce underlying anxiety. Visit www. sadag.org for more information. DID YOU KNOW? 50% of OCD cases are severe. Only 10% of sufferers are receiving treatment. It is one of the top 10 most disabling diseases according to the World Health Organization. HeadLine DO YOU SUFFER FROM OCD?