ADHD and Bipolar Disorder not to be Diagnosed Rashly 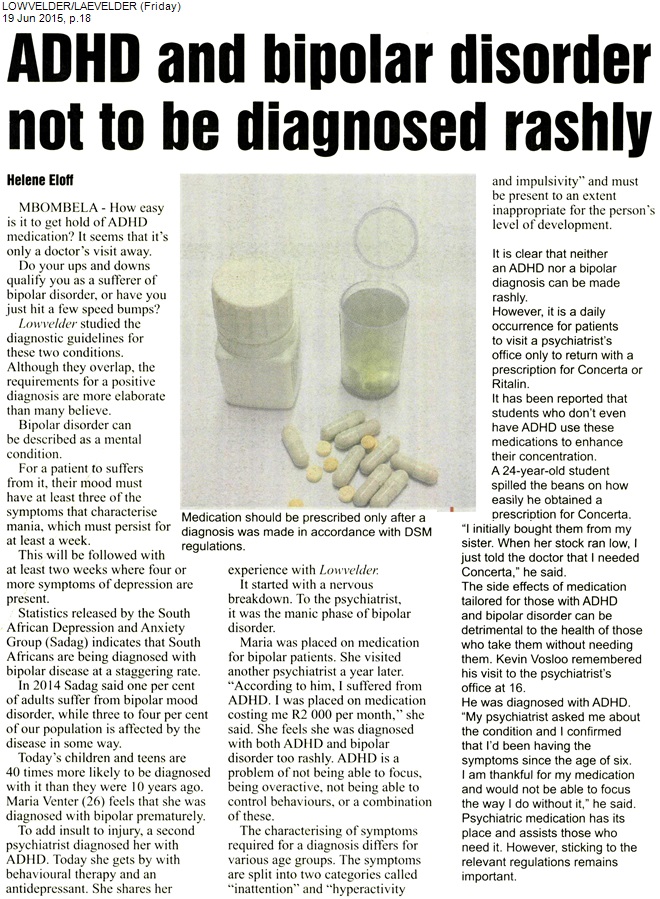 MBOMBELA - How easy is it to get hold of ADHD medication? It seems that it's only a doctor's visit away. Do your ups and downs qualify you as a sufferer of bipolar disorder, or have you just hit a few speed bumps? Lowvelder studied the diagnostic guidelines for these two conditions. Although they overlap, the requirements for a positive diagnosis are more elaborate than many believe. Bipolar disorder can be described as a mental condition. For a patient to suffers from it, their mood must have at least three of the symptoms that characterise mania, which must persist for at least a week. This will be followed with at least two weeks where four or more symptoms of depression are present. Statistics released by the South African Depression and Anxiety Group (Sadag) indicates that South Africans are being diagnosed with bipolar disease at a staggering rate. In 2014 Sadag said one per cent of adults suffer from bipolar mood disorder, while three to four per cent of our population is affected by the disease in some way. Today's children and teens are 40 times more likely to be diagnosed with it than they were 10 years ago. Maria Venter (26) feels that she was diagnosed with bipolar prematurely. To add insult to injury, a second psychiatrist diagnosed her with ADHD. Today she gets by with behavioural therapy and an antidepressant. She shares her experience with Lowvelder. It started with a nervous breakdown. To the psychiatrist, it was the manic phase of bipolar disorder. Maria was placed on medication for bipolar patients. She visited another psychiatrist a year later. "According to him, I suffered from ADHD. I was placed on medication costing me R2 000 per month," she said. She feels she was diagnosed with both ADHD and bipolar disorder too rashly. ADHD is a problem of not being able to focus, being overactive, not being able to control behaviours, or a combination of these. The characterising of symptoms required for a diagnosis differs for various age groups. The symptoms are split into two categories called "inattention" and "hyperactivity and impulsivity" and must be present to an extent inappropriate for the person's level of development. It is clear that neither an ADHD nor a bipolar diagnosis can be made rashly. However, it is a daily occurrence for patients to visit a psychiatrist's office only to return with a prescription for Concerta or Ritalin. It has been reported that students who don't even have ADHD use these medications to enhance their concentration. A 24-year-old student spilled the beans on how easily he obtained a Drescriotion for Concerta. "I initially bought them from my sister. When her stock ran low, I just told the doctor that I needed Concerta," he said. The side effects of medication tailored for those with ADHD and bipolar disorder can be detrimental to the health of those who take them without needing them. Kevin Vosloo remembered his visit to the psychiatrist's office at 16. He was diagnosed with ADHD. "My psychiatrist asked me about the condition and I confirmed that I'd been having the symptoms since the age of six. I am thankful for my medication and would not be able to focus the way I do without it," he said. Psychiatric medication has its place and assists those who need it. However, sticking to the relevant regulations remains important. Medication should be prescribed only after a diagnosis was made in accordance with DSM regulations.