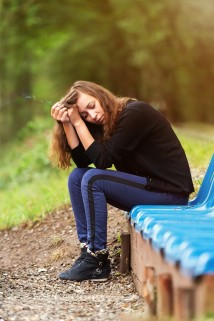 “He is sooo OCD,” I overhear a 20-something snarkily remark to a friend.
The hair on my skin crawls. As someone with a diagnosis of obsessive-compulsive disorder(OCD) — one from a psychiatrist, not Urban Dictionary — I bristle. Sure, the remark was insensitive, even callous, but here’s why I cringe: the seemingly innocuous remark perpetuates public misperceptions.

OCD, the medical diagnosis, is far more impactful than OCD, the movie diagnosis. Unlike Jack Nicholson’s endearingly misfit character in “As Good as it Gets,” OCD signifies more than an uncompromising adherence to routine. The person with OCD faces education and workplace stigma from puzzled colleagues. At its worst, OCD can be incapacitating. (Read up on Howard Hughes for an idea of how bad it can get.)
People with obsessive-compulsive disorder are inundated with intrusive, unwanted thoughts preying on self-identity. Imagine a horrific crime and, odds are, a person with OCD has committed it. In his own mind, that is.

To cope, people with OCD seek reassurance from themselves, family, and friends. The underlying queries: 1) Are these thoughts real? 2) What do they mean? Loved ones may question the unquenchable thirst for reassurance, or, worse yet, deride the person with OCD as needy and helpless.

In reality, the actions of the person with OCD are logical and flawed. The person with OCD faces a relentless barrage from his own mind. He is a murderer, a rapist, a fatally flawed human being. Consumed with anxiety, he turns to loved ones and friends for relief. Logical, right? Yes — but there is a fatal flaw. The person with OCD, seeking justifiable relief, scratches the itch. While the relief feels oh so good, it is temporary. There will be a new obsession tomorrow.
For a person with OCD, the brain seizes on his or her worst fear. For example, there is a front-page headline about two parents forgetting their newborn in a sweltering minivan. As a new parent, the tragic story paralyzes the person with OCD. Gripped by fear, he wonders, “Could I do the same thing?” With his vivid imagination and strained logic, the person with OCD convinces himself that yes, indeed, he could — and maybe wants to — harm his child.

While the person with OCD knows that the thoughts are irrational, doubt haunts him. The OCD mind demands absolute certitude. “How can I trust myself around my child? I might hurt him,” he confesses. Like a malfunctioning VCR, his tortured mind autoplays the attention-grabbing headline over and over again. To placate the overwhelming fear, he insists that a loved one accompany him and his newborn for every grocery run. Itch, meet scratch.

For a person with OCD, the tug-of-war between his logical, analytical mind and OCD is an agonizing ritual. The OCD feelings are too powerful to resist. While the person with OCD understands that certainty is an illusion, the craving — the itch — has an irresistible emotional pull. In a bitter twist, the quickest way for relief is to resist the itch. Let the thought marinate, provoking the crippling anxiety. The anxiety is suffocating, stifling your ability to functionally. Or so you think.

Yes, I know all of OCD’s tricks — the overpowering feelings, the pounding anxiety, the mental anguish. OCD is a mean-spirited bully. He thrives on conflict, taunting you to spar with him. Don’t. Like most bullies, OCD is a one-trick pony. When you label him for what he is (a brain trick or mental hiccup), you will notice something: his punches glance off you. And your life, once filled with trepidation over the next thought, can become As Good As It Gets.