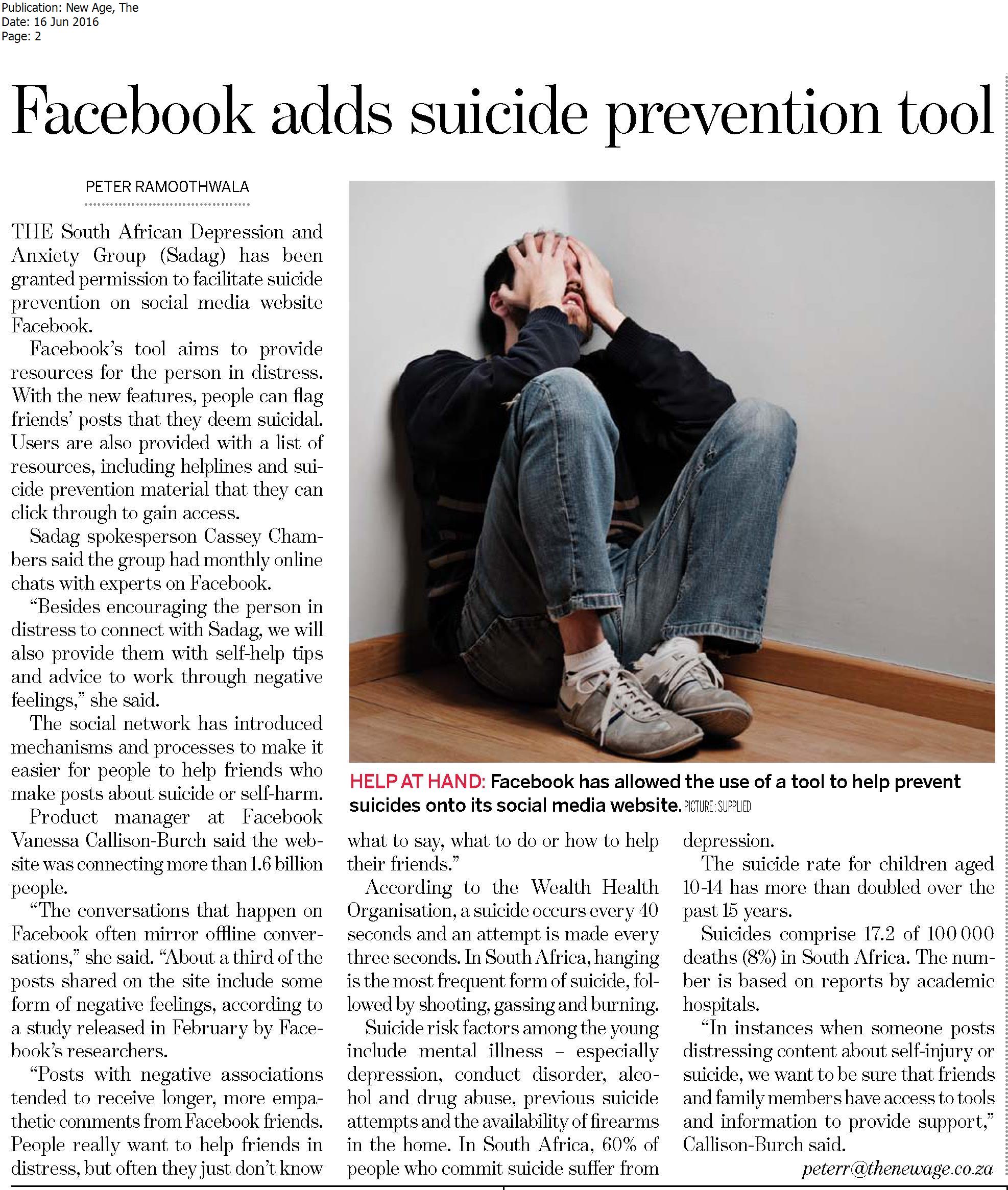 THE South African Depression and Anxiety Group (Sadag) has been granted permission to facilitate suicide prevention on social media website Facebook. Facebook's tool aims to provide resources for the person in distress. With the new features, people can flag friends' posts that they deem suicidal. Users are also provided with a list of resources, including helplines and sui-cide prevention material that they can click through to gain access. Sadag spokesperson Cassey Cham-bers said the group had monthly online chats with experts on Facebook. "Besides encouraging the person in distress to connect with Sadag, we will also provide them with self-help tips and advice to work through negative feelings," she said. The social network has introduced mechanisms and processes to make it easier for people to help friends who make posts about suicide or self-harm. Product manager at Facebook Vanessa Callison-Burch said the web-site was connecting more than 1.6 billion people. "The conversations that happen on Facebook often mirror offline conver-sations," she said. "About a third of the posts shared on the site include some form of negative feelings, according to a study released in February by Face-book's researchers. "Posts with negative associations tended to receive longer, more empa-thetic comments from Facebook friends. People really want to help friends in distress, but often they just don't know what to say, what to do or how to help their friends." According to the Wealth Health Organisation, a suicide occurs every 40 seconds and an attempt is made every three seconds. In South Africa, hanging is the most frequent form of suicide, fol-lowed by shooting, gassing and burning. Suicide risk factors among the young include mental illness - especially depression, conduct disorder, alco-hol and drug abuse, previous suicide attempts and the availability of firearms in the home. In South Africa, 60% of people who commit suicide suffer from depression. The suicide rate for children aged 10-14 has more than doubled over the past 15 years. Suicides comprise 17.2 of 100 000 deaths (8%) in South Africa. The num-ber is based on reports by academic hospitals. "In instances when someone posts distressing content about self-injury or suicide, we want to be sure that friends and family members have access to tools and information to provide support," Callison-Burch said. peterr@thenewage co za Facebook adds suicide prevention tool PETER RAMOOTHWALA HELP AT HAND: Facebook has allowed the use of a tool to help prevent suicides onto its social media website. PICTURE : SUPPLIED