An integrative holistic approach to depression 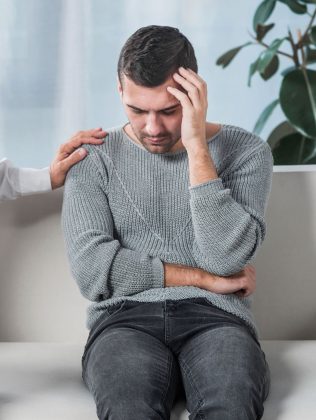 Depression, anxiety and panic attacks are not signs of weakness, but rather signs that you have been trying to remain strong, using your own ego willpower, for far too long. One in three of us will experience symptoms at some point in our lives and will need love and support. I favour an integrative, holistic approach to understanding and dealing with depression – a ‘whole body’ disorder that involves the brain, body and mind, thoughts and feelings.

According to The South African Depression and Anxiety Group (SADAG), research has shown that 20% of the population will suffer from a depressive illness during the course of their lives. It’s far more common in women than in men, affecting 1 in 5 women and 1 in 15 men. Women are at greater risk due to hormones, work stressors, family responsibilities and increased rates of sexual abuse and poverty.

The main types of depression

1. Major depression: a combination of symptoms that interfere with the ability to work, sleep, eat and enjoy pleasurable activities

2. Dysthymia: involves long-term chronic symptoms which are not as disabling as those of major depression but prevent you from feeling predominantly good

4. Seasonal affective disorder (SAD), found in sensitive people when the sun does not often shine – hence the most important treatment is getting out into sun and nature whenever you can. Sunlight early morning and late afternoon provides us with the healing of the sun, as well as vitamin D.

Depression can happen to anyone, at any age, to people of any race or ethnic group. It’s important to differentiate between feeling down, or having the blues, and clinical depression. At certain times in our lives we all go through periods of feeling sad or not coping, usually as a result of emotional trauma like divorce, financial difficulties, the death of a loved one or losing a job. Usually within a relatively short period of time, you’re able to come to terms with the situation and pick up the pieces once again. When you’re not able to do so, however, when these symptoms continue and you’re unable to cope, it’s important to seek support. When you’re clinically depressed, you can’t just simply ‘pull yourself together’ and get better.

The problem with antidepressants

Depression, insomnia and anxiety are over medicated, as a quick fix, in our society, which would rather use medication than go into the deeper, often painful, blocked emotions that cause depression, and where true healing happens. Antidepressants can play a role but will, at best, manage the symptoms for a while, even then with many side effects. Prescribing antidepressants to patients is not enough. Transpersonal psychotherapy and holistic health counselling are essential elements in an integrative approach.

Despite what you’ve been led to believe, antidepressants have repeatedly been shown in long-term scientific studies to worsen the course of mental illness, as well as increasing the risks of liver damage, bleeding, weight gain, sexual dysfunction and reduced cognitive function. They also have a well-established history of causing violent side effects, including suicide and homicide. Antidepressants are among the most difficult drugs to taper from, more so than alcohol and morphine. While it might be called ‘going through withdrawal’, medical professionals have been instructed to call it ‘discontinuation syndrome’, with debilitating physical and psychological reactions.

Even if we accepted the proposition that medication is helpful for some, 82% of which is due to the placebo effect, according to Dr Irving Kirsch (Associate Director of the Program in Placebo Studies, lecturer in Medicine at Harvard Medical School), deducting a medical cause from this observation would be the same as saying that shyness is caused by a deficiency of alcohol, or that headaches are caused by a lack of codeine.

Dr Kelly Brogan, psychiatrist and author of A mind of your own: The truth about depression states that prescription drugs can even cause depression. As she says: “Let’s face it, our current medical industry loves pills. When you go to the doctor for any kind of discomfort with any kind of diagnosis, chances are that the doctor will write out a slip of paper and send you to the pharmacy. Every illness, every injury, every bodily inconvenience has some kind of corresponding medication for us to take. So that’s what we’ve done for the greater part of the last century. It’s tempting to think that we can be fixed by medication because it’s quick and easy.

“The truth is that our bodies are more complex than we’ve been taught, and more importantly, we know much less than we think we do. Only recently have we started to understand how connected the gut, brain, mind, hormones, and immune systems are. So it’s not a huge surprise that we think of our bodies as machines – that we can feed them some chemicals and they’ll run smoothly again like a car that just got an oil change.”

The link between mental health and gut health

Depression is the mental health condition mostly associated with long-term stress, as is gut and immune system health. High levels of cortisol (found in chronic distress) and low serotonin (the ‘feel-good’ hormone and neurotransmitter), with adrenalin and noradrenalin (stress hormones) dysfunction, all found in chronic

So does the internal stressful world experienced when negative energy is turned inward towards the self. Negative thought cycles lead to dysfunction in the manufacturing of specific peptides or information substances. It is our way of thinking and the emotions around the search for meaning that are the root causes of depression – not a chemical imbalance in the brain, which is the result. Therefore, if you think a chemical pill can save, cure, or fix you, you’re wrong.

Nightmares, forgetfulness, fatigue, irritability, deep unhappiness, apathy, poor concentration, social isolation, increased or decreased appetite, increased intake of tea, coffee, tranquillisers and antidepressants, and increasing feelings of aggression and hopelessness, are all symptoms of negative stress, but also of depression or dysthymia (mild depression). When these symptoms are long lasting or interfere with your ability to function at home or at work, you will need support to manage your depression holistically.

This perspective, which sees disease as teacher, does not imply criticism or suggest in any way that you are the cause of your own disease! It is meant to be a tool of empowerment to help you realise that disease has deeply unconscious causes and can act as a powerful and gifted teacher in helping you return to health and wellness. As American psychologist, James Hillman says in his book, A Blue Fire: “The right reaction to a symptom may as well be a welcoming rather than laments and demands for remedies, for the symptom is the first herald of an awakening psyche which will not tolerate any more abuse. Through the symptom the psyche demands attention… Precisely what each symptom needs is time and tender care and attention. Just this same attitude is what the soul needs in order to be felt and heard.”

There are so many natural remedies to use, from food to highly-effective, well-researched herbal remedies. These will manage overall health and wellbeing and alleviate symptoms, but, most importantly, natural remedies support physiology of the whole body and mind – in this instance specifically the neurotransmitters (neuropeptides) as informational substances (including all of them and not only one, for eg. serotonin, dopamine, acetylcholine, adrenalin and noradrenalin, as well as gamma amino butyric acid or GABA and glutamate), hormones and epigenetic renewal.

And as A Course in Miracles says: “In general terms, depression is caused by our identification with the ego, which brings with it a sense of deprivation – the belief that due to forces beyond our control, we lack and cannot acquire the things we need to be happy. Depression is healed by choosing to renounce the ego and listen to the Higher Self, Who reminds us that our sense of deprivation comes only from our own decision to deprive ourselves, and restores to our awareness the fact that we already have everything we need to be happy.”