How Psychotherapy Can Help Bipolar Disorder

How Psychotherapy Can Help Bipolar Disorder 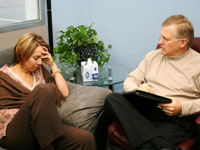 Talk therapy can help bipolar patients function and feel better.
(ISTOCKPHOTO)
While medication remains the bedrock treatment for bipolar disorder, a few different types of psychotherapy have been modified especially for people with this condition. The therapies that have been tested include helping patients work on family coping and relationships; learn to understand and reorder their own distorted thinking; and develop strategies for managing mood swings.

The best therapy programs include these four common features.

Read how she took back her life Read more
More about bipolar disorder
Until quite recently talk therapy had a minor role to play in the treatment of bipolar disorder. Many patients describe hospitalizations combined with high doses of mood-flattening drugs, but little effort to understand the sometimes irrational thoughts of people with the disorder.

While she was in college, Laurel Lemke, now 54, of Lakewood, Wash., was hospitalized for the first time, for six weeks. "During my first mania, I thought I had ESP, because my mind was putting connections between things in a way that made me think I had special abilities," she says. She doesn't know the diagnosis that was made because no one told her then. "At that time doctors didn't share their diagnoses with patients."

Targeted therapy speeds recovery
That's changing because of new evidence from a large, multicenter study on bipolar disorder. It found that psychotherapy that has been modified for people with bipolar can help substantially reduce the risk of a relapse.

In the study 84 bipolar patients were assigned to one of three different types of talk therapy, while 68 received collaborative care, in which they got a self-care workbook, an educational videotape about bipolar disorder, and three one-hour sessions focused on self-management tools. The group that received therapy had significantly higher recovery rates and shorter recovery times than those who received the video and workbook.

"Psychotherapy seems to be particularly good in protecting against the depressive part of bipolar disorder," says Michael Thase, MD, professor of psychiatry at the University of Pennsylvania. "Therapy has measurable long term effects in patients with bipolar. It cuts down on relapses and improves work attendance."

"People need to establish a rhythm to their days, a pattern they can fall into," says Dr. Markowitz. "They need to avoid overstimulation, and their days must be structured to allow them to get enough sleep. This is critical. Lack of sleep is the best-known trigger of mania."

If the daily routine gets jumbled, he says, it becomes increasingly difficult for people to take their medications as directed. But talk therapy doesn't take the place of drugs in bipolar disorder, the way it can in depression.
Lead writer: Mary Pinkowish
Last Updated: April 20, 2008