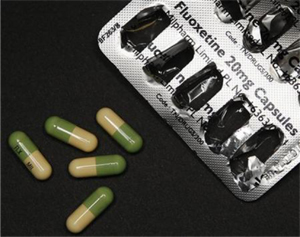 The antidepressant drug Prozac, also known as fluoxetine, are seen on a table in Leicester, central England February 26, 2008 in this posed photograph.

(Reuters) - More than one in 10 Americans over the age of 12 takes an antidepressant, a class of drugs that has become wildly popular in the past several decades, U.S. government researchers said Wednesday.

Antidepressants were the third-most common drug used by Americans of all ages between 2005 and 2008 and they were the most common drug among people aged 18 to 44, according to an analysis by the U.S. Centers for Disease Control and Prevention's National Center for Health Statistics.

The team analyzed data on more than 12,000 Americans who took part in the National Health and Nutrition Examination Surveys between 2005 and 2008.

They found that antidepressant use in the United States jumped nearly 400 percent in the 2005-2008 survey period compared with the 1988-1994 period, with 11 percent of those over age 12 taking the drugs.

The increase followed the U.S. approval in 1987 of Eli Lilly and Co's Prozac or fluoxetine, the first of a newer class of antidepressants known as selective serotonin re-uptake inhibitors or SSRIs.

Once prescribed, many people continue taking antidepressants, with more than 60 percent of Americans who use the drugs report being on them for 2 years or more.

And about 14 percent of Americans taking antidepressant medication have done so for 10 years or longer.

Patients who take the drugs often get them from their regular doctor rather than a so-called mental health professional.

According to the survey, fewer than a third of Americans taking one antidepressant drug and fewer than half of those taking more than one have seen mental health professional in the past year.

Although first introduced for depression, several antidepressants are now used to treat a host of problems, including anxiety disorders, obsessive compulsive disorder, bulimia and even post traumatic stress disorder.

(Reporting by Julie Steenhuysen in Chicago; Editing by Cynthia Osterman)