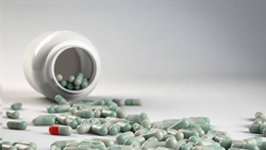 Now that Novartis, GlaxoSmithKline, AstraZeneca, Merck, and Sanofi have either scaled back or (in the case of GSK and AZ) abandoned any further Central Nervous System (CNS) R&D, the hand-wringing has begun, with distinguished professors like Dr. Steven E. Hyman writing alarmist editorials about the imperiled future of psych meds and articles in the media talking of a "crisis" in psych-med research. (The opening sentence of a recent editorial in Schizophrenia Bulletin was: "Psychopharmacology is in crisis." The headline of Dr. Hyman's piece is "Psychiatric Drug Development: Diagnosing a Crisis.") 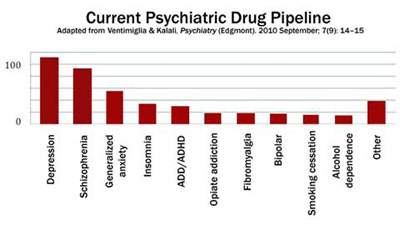 First, let's get one thing straight. There is no "crisis." A review of the new-drug pipeline shows that 137 active R&D programs have 417 ongoing development projects aimed at 19 psychiatric indications. Most of these programs are in Phase I or II trials. Psych-med R&D is more vigorous than ever.

Advertising
The widely reported shutdown of CNS research programs at GSK and AZ (and the scale-backs at Pfizer and elsewhere) represent the continuation of a process begun long ago, to outsource riskier types of development to academia (which gets funding from the drug companies as well as government, via NIH and NMIH) and to smaller, less risk-averse drug companies (including startups) who eventually sell their projects back to the giant pharmas, once it looks like they've "got something."
But the whole notion that a GSK or an AstraZeneca can convert R&D dollars into brand-new, never-tried-before, fundamentally innovative psych meds is ridiculous in the first place, because that's not how development of new treatments works. You can only develop a targeted drug when you know the precise biochemical mechanism of action of the underlying disease. That's not the case for depression, schizophrenia, or any of the other major psychiatric illnesses. As H. Christian Fibiger correctly points out in his Schizophrenia

Bulletin piece:
The discovery of all three major classes of psychiatric drugs, antidepressants, antipsychotics, and anxiolytics, came about on the basis of serendipitous clinical observation. At the time of their discoveries, the mechanisms by which these molecules produce their effects were unknown, and it was only later that antipsychotics were shown to be D2 receptor antagonists, antidepressants monoamine reuptake inhibitors, and anxiolytics GABA receptor modulators. It is interesting and perhaps instructive to consider whether any of these classes of drugs could have been discovered by current drug discovery strategies. For example, what genetic or preclinical data exist that point to the D2 dopamine receptor as a likely target for antipsychotic activity? Presently there are no genetic data that suggest that this receptor is expressed or functions abnormally in psychotic disorders. And without the benefit of the prior clinical validation, it is difficult to see how preclinical data alone would point to the D2 receptor as an interesting potential target for the treatment of psychotic disorders. The same can be said for monoamine transporters with respect to depression where, like psychosis, there are no animal models based on disease pathophysiology and no compelling preclinical data pointing to these as potential targets for antidepressant drugs.

The best Big Pharma has been able to do over the years is craft me-too drugs once a serendipitous discovery has been made. But the serendipitous discoveries themselves (such as John Cade's discovery that injecting Guinea pigs with lithium urate made them placid) can't be manufactured; they can't be bought. They happen by accident.
It's no secret that Big Pharma is hoping that discoveries in genetics will pave the way to finding new psychiatric drugs. The hope is that once genetic markers have been found for, say, depression or schizophrenia, this will either suggest new avenues of research (depending on what the target genes are doing in vivo) or will at least make it possible to identify "drug responders," patients who can be genetically screened prior to entry into drug trials. (This is seen as a possible way to defeat the problem of increasing placebo effectiveness in clinical trials.) The trouble is, the harder scientists look for genetic markers for depression or schizophrenia, the less certain it becomes that discrete markers exist. Efforts to find a "depression gene" have been dismal, and in schizophrenia research more than 8,700 polymorphisms in 1,000+ genes have been identified as possible markers (database here). Likewise, hundreds of genes have been implicated in autism and Alzheimer's. The notion that any mental illness will resolve, in straightforward fashion, to one or two (or ten) specific genetic markers is a bit fanciful at this point.

If psychiatric medicine is at a crossroads, it's because we don't know what's causing these so-called "illnesses," on a biochemical level. We know the receptor binding profiles of scores of mostly not-very-useful drugs, but the backward reasoning that says depression (for example) is a disease of serotonin (or norepinephrine or dopamine or histamine) imbalance, simply because this or that drug binds to this or that receptor, isn't really a theory of disease, and everybody knows it, at this point.
Personally, I see the drug-development non-crisis as a good thing. It's a clear signal to startups and smaller companies to take the lead in developing new psychiatric drugs. I can't think of a business that's more ripe for the entry of small, disruptive, upstart companies. That's where true innovation comes from, in any case. Let's face it: The big guys had their day. They did a mediocre job. Time for some fresh blood.