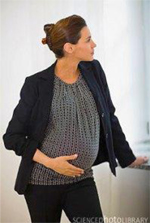 Pregnant women who stop taking their antidepressants do not seem to be at greater risk for a depressive episode during or after pregnancy than those who continue taking their medications, according to a new Yale University study.

The study followed women who were receiving prenatal care during pregnancy and the postpartum period. A subgroup of 778 participants had a history of depression and had decided on their own whether to continue or discontinue antidepressant medication.

In general, there was no difference found in the risk of having a major depressive episode between women who continued taking medication and those who did not.

“Women often know if they can discontinue medication because they have intimate experience of what happens when they stop treatment. We think that the women who felt they could stop treatment, temporarily did so and generally remained well,” said Kimberly Yonkers, professor of psychiatry and obstetrics, gynecology, and reproductive sciences, and lead author of the report.

In contrast, participants who had experienced four or more major depressive episodes before pregnancy were likely to suffer with depression during pregnancy whether or not they received antidepressants.

“Those women should carefully consider their options. There were women with severe illness who felt they could not stop medication, and they continued treatment in pregnancy. This group had a high rate of relapse into depression but it might have been even higher if they stopped their treatment,” Yonkers said.

The researchers are currently analyzing how antidepressant use affects the health of babies born to depressed mothers.

The study is published online and is scheduled to appear in the November print issue of the journal Epidemiology.