The Therapist May See You Anytime, Anywhere 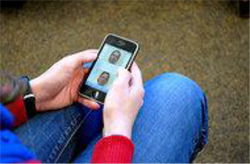 HELPING HANDS One commonly used program tries to treat those who tend to fixate subconsciously on hostile faces.

Not for long, if some scientists have their way. In the past few years researchers have been testing simple video-game-like programs aimed at relieving common problems like anxiety and depression. These recent results have been encouraging enough that investigators are now delivering the programs on smartphones — therapy apps, in effect, that may soon make psychological help accessible anytime, anywhere, whether in the grocery store line, on the bus or just before a work presentation.

The prospect of a therapy icon next to Angry Birds and Fruit Ninja is stirring as much dread as hope in some quarters. “We are built as human beings to figure out our place in the world, to construct a narrative in the context of a relationship that gives meaning to our lives,” said Dr. Andrew J. Gerber, a psychiatrist at Columbia University. “I would be wary of treatments that don’t allow for that.”

The upside is that well-designed apps could reach millions of people who lack the means or interest to engage in traditional therapy and need more than the pop mysticism, soothing thoughts or confidence boosters now in use.

“That is what makes the idea so promising,” said Richard McNally, a psychologist at Harvard whose lab recently completed a study of 338 people using a simple program accessible on their smartphones. “But there are big questions about how it could work, and how robust the effect really is.”

The smartphone study is only one of the most recent tests of an approach called cognitive bias modification, or C.B.M., that seeks to break some of the brain’s bad habits. The premise, pioneered by Colin MacLeod of the University of Western Australia, is straightforward. Consider people with social anxiety, a kind of extreme shyness that can leave people breathless with dread. Studies have found that many who struggle with such anxiety fixate subconsciously on hostile faces in a crowd of people with mostly relaxed expressions, as if they see only the bad apples in a bushel of mostly good ones.

Modifying that bias — that is, reducing it — can interrupt the cascade of thoughts and feelings that normally follow, short-circuiting anxiety, lab studies suggest. In one commonly used program, for instance, people see two faces on the screen, one with a neutral expression and one looking hostile. The faces are stacked one atop the other, and a split-second later they disappear, and a single letter flashes on the screen, in either the top half or the bottom.

Users push a button to identify the letter, but this is meaningless; the object is to snap the eyes away from the part of the screen that showed the hostile face, conditioning the brain to ignore those bad apples. That’s all there is to it. Repeated practice, the researchers say, may train the eyes to automatically look away, or the frontal areas of the brain to exercise more top-down control.

“It’s a little boring, because it’s repetitive, but you’re only doing it for a few minutes a few times a day,” said Stefanie Block, 26, a University of Michigan graduate student who took part in the Harvard study while living in Boston. “I just did it when commuting to work on the subway; it’s crowded, there isn’t much you can do, it was the perfect time.”

In lab experiments, some researchers have gotten very strong results, “with effect sizes like you’d see in regular therapy,” said Nader Amir, a psychologist at San Diego State University. In a series of experiments, Dr. Amir has found that about half of people with an anxiety disorder who complete a full course — practicing on a computer for about 30 minutes twice a week, for four to six weeks — improve enough that the diagnosis no longer applies. He has tested programs that target social anxiety and generalized anxiety disorder and is part owner of a company that is marketing the technology.

A study among 40 children with chronic anxiety, published in December, found that a similar attention bias program produced “significant reductions in the number of anxiety symptoms and symptom severity,” according to the authors, who included Dr. Daniel Pine of the National Institute of Mental Health and Yair Bar-Haim of Tel Aviv University.

Psychologists in Europe have even tried a bias modification program aimed at heavy drinking — a computer task in which people push away images of alcoholic drinks, using a joystick, and zoom in on nonalcoholic ones — and found that it improved the effectiveness of talk therapy aimed at reducing the habit.

Other researchers have not had quite the same success. “I am far from convinced that this is for real,” said Willem Van der Does, a psychologist at Leiden University in the Netherlands, who has several papers under review testing bias modification.

“I did not notice any positive effect,” one woman with social anxiety who participated in the Harvard study said in an e-mail. “It seemed similar to when I played Scramble or other games on my phone.”

In a review of studies of bias modification, researchers at the University of Pennsylvania concluded last year that the technique had a small effect that “significantly modified anxiety but not depression.” The authors noted that there was evidence of what scientists call a “file drawer” problem — in which studies finding no effect are filed away or ignored, while encouraging ones are published. “I think in this field the standards for publishing positive studies are lower than for negative ones,” Dr. Van der Does said in an e-mail.

It is perhaps fitting that the largest study to date — by Phil Enock, a graduate student at Harvard; Stefan Hofmann, of Boston University; and Dr. McNally — produced results that were both encouraging and confusing. The team began recruiting participants in the summer of 2010, using Craigslist and online bulletin boards for social anxiety.

In March 2011, they were flooded, after an article in the Economist magazine about cognitive bias modification mentioned the project. Months later, after 338 participants with anxiety symptoms that ranged from mild to severe completed a total of more than 4,000 sessions of the two-face therapy application, the researchers had some results.

Participants who got the treatment improved their scores on a questionnaire measuring anxiety, dropping by an average of 22 points, compared with an 8-point drop among people in a “waiting list” group, who got no computer games to play. However, a placebo group in the study practiced with a two-face video program not intended to shift the eyes from one face or the other, and their anxiety levels as measured on questionnaires also fell by about 22 points, just as they had for those who got the treatment.

Karin Langer, 34, an architectural historian in Chicago who scored high on some measures of social anxiety, was among those who seemed to improve using the app. Ms. Langer works at home, interacts almost entirely by e-mail, and found herself increasingly anxious about phone conversations with colleagues. “I did notice a difference after using the therapy,” she said. “But it may have been due to a placebo effect. I felt good about myself, that I was doing something for my issues, and a lot happened in those two months outside the study that could have helped.”

Stranger still, the people who reported that they had learned about the study from the Economist article responded very well to the program — whether getting the treatment app or the placebo one — as if the article itself had some power of suggestion.

“We’re not exactly excited about that finding; we have no idea what it means,” said Mr. Enock, adding that there is still a lot of work to do to determine who best responds to which specific type of bias modification, and how strong the effect really is.

But, he said, “We certainly have shown that you can deliver treatments on smartphones, you can put attention and bias modification tools literally in people’s hands, and there’s no reason to hold back” from testing them.