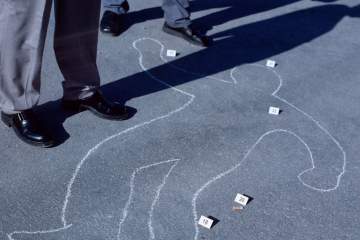 Yoga and the Mind: Can Yoga Reduce Symptoms of Major Psychiatric Disorders?

Studies and media coverage of violence and mental illness tends to focus on the mentally ill as potential perpetrators— but a new study suggests that having a mental illness increases the risk of being a victim of murder nearly fivefold.

Researchers led by Casey Crump of Stanford University report in the BMJ on a study of homicides occurring in Sweden, among a population of around 7.2 million residents, between 2001 and 2008. Using data from country’s national registries, they determined whether or not the victims had ever been diagnosed with a mental illness, either at as an outpatient or in a hospital.

During the study period, 615 people became victims of homicide, and 23% of them had ever been diagnosed with a mental illness, compared with 9% rate of mental illness diagnoses in the general population. After adjusting for other factors that affect the risk of mental illness, such as sex and age, the odds of being murdered were around five times higher for the mentally ill.

“Popular media reporting portrays mental illness as posing a threat to the safety of others and these continual stigmatizing portrayals may make the violent victimization of an already marginalized section of society more likely,” the authors of an editorial that accompanied the article write.

MORE: The Link Between Marijuana and Schizophrenia

The study was not designed to determine how much of this heightened risk is due to the violence that results from the trafficking of illegal drugs, and how much is linked with the actual effects of alcohol, other drugs or key risk factors that can lead to addictions, such as child abuse.
Just behind substance abuse were personality disorders, contributing to a three-fold increased risk of homicide. One disorder in particular, antisocial personality disorder, which involves a lack of concern for others, impulsivity and repeated criminal behavior, seemed a logical risk factor for increasing the chances of becoming a murder victim.

MORE: After Aurora, Questions About Mass Murder and Mental Illness

Depression was also linked with nearly as much risk as personality disorders, raising the odds of being a murder victim nearly three-fold, while anxiety disorders were associated with a doubling of homicide death risk. The research doesn’t make it clear why these disorders should be associated with violent victimization, but the correlation remained even after the scientists adjusted for the effect of socioeconomic factors like unemployment that might contribute to people living in dangerous neighborhoods where the risk of homicide is higher in general.

Interestingly, schizophrenia and delusional disorders— the conditions most associated with violence, at least among the public — did not carry a significant risk of being victimized, but too few of the Swedish participants were diagnosed with these disorders to draw any meaningful conclusions. Other studies have found a significantly increased risk of violent victimization among people with schizophrenia.

Because the murder rate in Sweden is seven times lower than that of the U.S., the authors suggest that their findings are “likely to have a larger public health impact” in the U.S. as a result. Greater awareness that mental illness can put people at risk of being victims of violent crime could help to lower rates of homicide in some situations. “Interventions to reduce violent death among people with mental disorders should tackle risks of victimization and homicidal death in addition to suicide and accidents,” they write.