Experts speculate that depression, substance abuse and sleep issues may all play a part 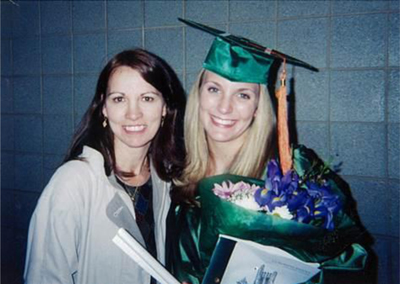 Boledovich Farhat decided to leave her boyfriend, three siblings and beloved hometown in Michigan to focus on saving her mother.

After watching her mom, Gail Boledovich, battle schizophrenia for three years and suffer from hallucinations and delusions, Julie resolved to take an engineering job in Bowling Green, Ky., and buy a house where her mom could live with her and have a beautiful garden and even an art studio to create her mosaics. Gail would be spared the stress of having to work or pay bills. Everything would work out, Julie thought.

But Gail Boledovich never made it to Kentucky. She took her own life on May 1, 2005, two days before her 49th birthday. She died from an overdose of prescription-strength Benadryl pills that doctors had prescribed to her to help her sleep at night. Boledovich took the lethal dose in the middle of the day.

Farhat’s mom could have been anyone’s mom, or aunt — or wife.

A new report from the Substance Abuse and Mental Health Services Administration (SAMHSA) shows a 49 percent increase in emergency department visits for drug-related suicide attempts for women aged 50 and older.

And women aged 40-69 are more at risk of killing themselves than other women, according to new research on age-specific suicide rates between 1998 and 2007. In 2007, this age group made up 60 percent of the 7,328 suicides reported among women.

Or it may have something to do with baby boomers’ higher rates of substance abuse, an important risk factor in suicide, said Julie Phillips, Ph.D., a social demographer and associate professor at Rutgers University in New Jersey. Phillips calculated the age-specific rates from data from the National Center for Health Statistics and the Census Bureau. And during the nine-year time period she studied, suicide rates are fairly stable for women younger than 40, and for women older than 70, suicide rates are actually on the decline.

Women over 50 may also be in crisis because pain and sleep disorders — common problems with aging — can lead to an increased use of prescription drugs, according to Albert Woodward, Ph.D., the project director of SAMHSA’s Drug Abuse Warning Network. According to the SAMHSA report, suicide attempts involving drugs to treat anxiety and insomnia increased 56 percent. Woodward adds that older women may experience depression because of health changes and other negative life events.

Loneliness and depression are also suicide risk factors. "Older women especially in the U.S. are more isolated and separated from daily human contact outside of work and the internet," says Ellyn Kaschak, Ph.D., emeritus professor of psychology at San Jose State University and the editor of the journal Women & Therapy.

Dr. LeslieBeth Wish, a psychologist and licensed clinical social worker in Sarasota, Fla., has found through her online surveys, lectures and focus groups a startling increase in suicide attempts with women ages 45 to 54. Women are susceptible to depression but older women may also be suffering from pre-menopause hormone fluctuations that can affect mood changes and depression. Also, existing long-term illnesses such as lupus or multiple sclerosis can worsen and breast cancers and other cancers might be diagnosed.

Dr. Wish also says middle-aged women are more aware of their mortality and may be disappointed and disillusioned that it’s too late for happiness. Transitioning to becoming an empty nester can also be stressful for women.

“Mental illness is a real debilitating illness,” Farhat says. “But unlike someone who is physically disabled, no one holds the door open for a person on the street having hallucinations.”

In honor of her mother, Farhat, now 30, and her three siblings started Mind Over Matter (MOM), a small nonprofit aimed at promoting mental health awareness and raising money for research and suicide prevention in Michigan.

“Society puts so much emphasis on how these people die, but I loved my mom — the way she died had nothing to do with the person she was.”