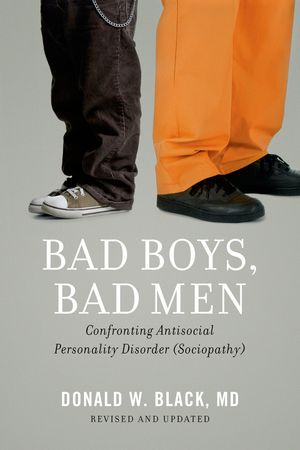 It may be hard to believe, but one of the most common and problematic mental disorders is ignored by the public and media alike. People — and reporters — breathlessly talk about depression, substance abuse and autism, but no one ever talks about antisocial personality disorder. Why?

Though better known as sociopathy, antisocial personality disorder, or ASP, affects up to 8½ million Americans and there is no cure, nor are there any good treatments. Psychiatrists like me who are interested in this disorder tend to be ignored and our concerns marginalized. The patients themselves can be difficult, and even unpleasant, and that limits interest. It is hard for people to be sympathetic toward those who tend not to arouse our concern. There are no poster children to point to.

Few mental health professionals are interested in the disorder and some run when a colleague tries to refer an antisocial patient to them. ASP is rarely discussed in medical schools, and few researchers take it on as a cause. Most telling, the National Institutes of Health (NIH), the government’s premier medical research organization, funds a grand total of two projects in which the term “antisocial” appears in the title. By contrast, the NIH funds hundreds if not thousands of studies on more conventional mental health topics such as schizophrenia, depression, anxiety disorders, and autism. How are we — as mental health professionals — to make headway in treating and preventing this disorder when the government does not lead the way?

First, let us consider what ASP is. Briefly, it is a disorder of chronic or serial misbehavior that begins in childhood and continues into adulthood, usually persisting throughout a person’s life. These are the rule breakers who see fit to violate society’s conventions. As children they fight with others, lie to their parents, and steal from the corner store. As adults, they abuse their partners or spouses, are irresponsible toward their children, and some are criminal. In the worst cases, some commit heinous acts of violence. Few of its sufferers are women, as it is predominately a man’s disorder. And sufferer is not the right word, because most antisocial persons do not “suffer” in the usual sense since they rarely believe anything is wrong. Their behavior is not the problem; society and its tiresome rules are the problem.

How did we arrive at this point? First, there is the lack of visibility. ASP is not on the public’s radar screen. While known to psychiatrists and psychologists for nearly 200 years in one form or another, few mental health professionals bother to make the diagnosis or to even make referrals for its evaluation or treatment. The public misunderstands the term antisocial, believing the disorder to relate to shyness, when it really relates to bad behavior directed against society. Finally, researchers tend to go where the money is. Since the NIH directs few funds to investigate ASP, why would an investigator study it? Take autism as an example. The amount of research exploded within the last decade when it became clear that the government was interested in the disorder. That could happen with ASP if the NIH changed its tune. Despite this deliberate indifference, over the past 50 years researchers have — mostly on their own time and money — consistently shown it to be one of the most heritable of disorders and to have a clear neurobiological basis.
Why should I and others care? Though under the radar, ASP isn’t going anywhere. It will continue — over time — to cost us billions and billions though its direct and indirect costs associated with law enforcement and criminal justice. Nearly all of us are victims of an antisocial person’s misdeeds; we fear them and even grapple with the disorder in our families. Now more than ever, psychiatry and society have the means to explore why some people turn bad, but progress will continue to accrue slowly until we begin to see ASP more clearly and commit ourselves to doing something about it.

Understanding the scope of ASP and coming to grips with it requires time and money. The NIH and other agencies must change their tune about funding ASP research and its many facets, particularly crime and violence. Priorities should include wide-reaching projects to explore its origins and search for methods to change its course. Geneticists must continue to investigate genes that might predispose individuals to ASP and determine how they function. Neuroscientists should work to pinpoint brain regions linked to antisocial behavior while identifying the neurophysiological pathways that influence its expression. Mental health professionals must overcome their own resistance to working with antisocial persons in order to develop new treatments. Last, we must focus attention on the group at highest risk of developing ASP: children with antisocial behavior. Improved understanding of their home life and social environment may lead to more effective interventions that may prevent ASP from developing. By treating and possibly preventing ASP, we can have a broad impact that ripples through society, thereby helping to reduce spousal abuse, family violence, and criminal behavior.

Donald W. Black, MD, is the author of Bad Boys, Bad Men: Confronting Antisocial Personality Disorder (Sociopathy), Revised and Updated Edition. He is a Professor of Psychiatry at the University of Iowa Roy J. and Lucille A. Carver College of Medicine in Iowa City. A graduate of Stanford University and the University of Utah School of Medicine, he has received numerous awards for teaching, research, and patient care, and is listed in “Best Doctors in America.” He serves as a consultant to the Iowa Department of Corrections. He writes extensively for professional audiences and his work has been featured in television and print media worldwide.