Most Young Girls With Depression Fail to Receive Treatment

View Disclosures and Other Information

An annual average of 1.4 million girls aged 12 to 17 experienced a major past-year depressive episode from 2008 to 2010, according to a “data spotlight” from the Substance Abuse and Mental Health Services Administration (SAMHSA). 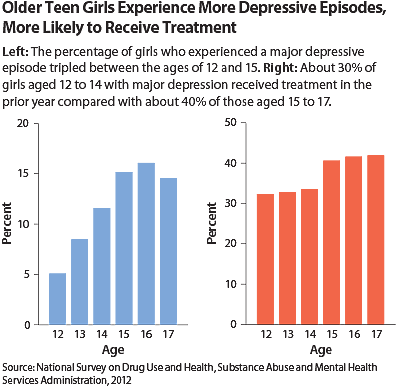 One of the report’s other important findings was that older adolescent girls experiencing major depressive episodes were more likely to receive treatment than younger ones—about two-fifths of girls aged 15 to 17 received treatment as opposed to only one-third of the girls aged 12 to 14.

A major depressive episode is defined in the survey using DSM-IV criteria. The report is based on combined data from the 2008 to 2010 SAMHSA National Survey on Drug Use and Health, which is a scientifically conducted annual survey of approximately 67,500 people throughout the country aged 12 and older.

“It is crucial that we provide adolescent girls the coping skills and social supports they need to avoid the onset of depression, and to offer behavioral health services that foster resilience and recovery if they experience it,” said SAMHSA Administrator Pamela Hyde in a statement. “These efforts are a sound investment in girls’ health and well-being and in our nation’s future.”

“Data Spotlight: Depression Triples Between the Ages of 12 and 15 Among Adolescent Girls” is posted at www.samhsa.gov/data/spotlight/Spot077GirlsDepression2012