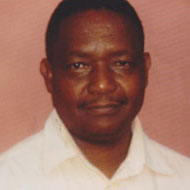 In 1991, I was involved in a horrible car accident in which I was trapped in the minibus wreckage. On the second day in bed at the hospital, I was suddenly struck, out of the blue by an intense fear that was accompanied by racing heart, nausea, dizziness and a feeling like going crazy. I struggled to reach a nurse who ordered me back to bed. The doctors were unable to diagnose the condition and neither was my GP I visited long after my discharge.

Help came six years later when I read an article about SADAG. I contacted Zane Wilson who discussed treatment options, and was able to send me pamphlets, informed me about her experiences, and invited me to their workshops.

SADAG influenced me to conduct research in my community into how people cope with mental disorders. The findings were frightening, people were suffering and did not know where to get help. I opened the Siyabuswa Depression and Anxiety Support Group in 2000. We meet once a month where we exchange experiences, share ideas, distribute pamphlets and share videos on latest therapies and treatments. I also participate on TV programmes, radio and films on mental disorders and offer articles to media. I also share my knowledge with two newly opened support groups from the neighbouring townships, which I lead, including the local Catholic Church Home Based Care Givers Team.