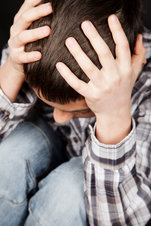 The current open question in the New Parent, Old Parent collaboration between Motherlode and Booming brought forth some of the most helpful advice I’ve ever seen from a “crowdsource.” I asked, “How do you know when it’s time to get professional help for a child who is anxious, depressed or angry beyond her years?”

Behind the scenes, I was a little worried about that as a question. On the one hand, it seemed vague. How old a child? What kind of problems? But I had a sense that for many parents who had chosen to find outside help for a child who was struggling emotionally, there must have been a moment — a point when the ordinary seemed to tip over into the extraordinary, and it became clear that reaching out would help. I thought others, looking back, might have something to say about the moment when they could have sought outside help, or the ways that help failed, or why they considered and rejected the idea.

Those parents (whom I always think of as the “been there done that” parents) did have something to say. Plenty of parents hesitated to consult someone from outside the family. They worried about possibly labeling their child; about whether the child would welcome help; about whether they “ought” to be able to handle things. But as I read through the stories of those who sought help and advice, some successfully, others less so, some very clear patterns emerged.

This isn’t professional advice. These may not be the markers a counselor, psychologist or therapist would suggest. But parents who have watched their child wrestle with anxiety, depression and other challenges name these as the signs that it’s time to seek help:

1. When your child is endangering himself or threatening to harm himself.
I knew it was time for outside help when our daughter was four and, during one of her daily rages, declared she would “make myself dead” (from behind a locked bathroom door). —Martha

2. When your other children are unhappy, frightened or upset by a sibling’s behavior, or a parent’s response to that behavior.
Our daughter was still throwing very long, angry tantrums at 5 and 6. She was well behaved in school, but so unpredictable at home it was really starting to affect our family life. She sometimes got so angry she would physically attack us. My husband and I would argue about the right way to discipline her. My younger son once said “how come (big sister) controls the family.” … We felt as if our whole life was being ruled by her behavior & it was dragging us down. We finally started seeing a family therapist once a week. … My husband and I say it’s some of the best money we ever spent.—MomofTwo

3. When the child’s behavior is interfering with his daily life, or the family’s functioning.
When the anxiety’s voice becomes louder than the members of the family, that’s when it’s time to seek treatment. It made it easy for us to judge – as long as we were able to put the needs and wants of our family ahead of the needs and wants of his anxiety, we stayed the course. But around age 6.5, the anxiety grew to be a near-constant “presence” in our lives – trying to dictate what we did and when. That’s when we went to therapy. —anxious mom

I think the turning point for us was when he didn’t even want to attend school on special days (fun days). He preferred to stay home and rest. It was hard to know whether that was due to him being fatigued or depression, but if felt like depression to me. Fun days weren’t fun for him anymore.—essjay

4. When disagreements about how to handle a child’s problems put a strain on your marriage or partnership.
When your child is running your life … when you are spending an hour every few days unloading onto your best friend how frustrated you are and how you’re feeling like you “flunked motherhood” … when you and your spouse are seriously at odds as to how to deal with the behavior, or one (or both) of you is regularly responding to the child’s behavior by getting completely enraged and out of control … when your other children are obviously frightened or upset by the conflict going on between you and the challenging child … time to get help. —herzliebster

5. When you, as a parent, don’t know what to do.
I wish several things: one that we had tried harder to find counselors whom they would have been willing to work with but I also wish that we had gotten counseling ourselves that would have helped us deal better with the issues our children were facing. The truth is that they looked to us for help but we often found it hard to know what to do and we needed help also. —ceilidth

What I know now – is that before children see a therapist or counselor – it should be the parents! It’s so hard to see the forest when you have a child who cannot live it seems without chaos, when you have tried all the ideas and routines suggested by professionals and otherwise…and still you sit back and watch your child suffer, and all the things you tried to avoid happening, happen. Children need their parents to understand and to have a better idea of what to do. That’s what I wish – that someone had helped me help her. — dal

“If you are considering it, you should act on it because that thought means something is out of whack,” wrote Just sayin’. And a number of commenters suggested that the effects of reaching out for help could outlast childhood:

One thing to remember when you’re thinking about therapy for your child: this sets early in life the expectation that what we do when we’re upset, depressed, or whatever is to talk honestly about it with someone who cares. We don’t drink, take drugs, engage in promiscuity, or any other self-destructive behavior. I think this has enormous power later, when the child is no longer under your daily care.—Karen Stone

When I was a child, we never spoke of my behavior as a mental health issue. In fact, we never spoke of it. It took me too long to get myself into therapy and seek treatment when I was going through a particularly rough spell as a young adult. The very idea of discussing this as a medical issue would not have been considered in the region where I grew up. … Now I’m a mother. If my son ever struggles the way I did, I want him to know that there are options. It is hard to ask for help. It may help to tell a troubled kid that is OK to get additional support. Getting help when you have a problem shows strength, not weakness.—Sarah321

A note of caution came from those who said, in essence, find the right person, or don’t bother. Many recounted finding professionals who seemed just as helpless as they were; or who frustrated the children or teenagers even further. Amid the stories of successful matches between children, families and various counselors or therapists were those of both children and teenagers who refused to go or refused to return. Many parents said the search for the right person (let alone the right local person with availability who accepted their insurance plan) took time. “We found a keeper our third time out of the gate,” noted tagnew.

My take on teenagers (25 years experience) is that unless THEY request or at least buy in to the counseling, it will not work very well. Teens are very good at telling counselors what they want to hear.

They generally do better talking to a trusted adult whom they already know and who they believe cares about them.
— Nancy

With a question like this, there’s always the risk of hindsight bias. Parents who sought help and wound up with happier or otherwise relieved children tended to see their choice as a good one; parents whose children didn’t benefit as much were more dubious. Even among the parent success stories, there are those who doubt (when I asked someone close enough to me, and far enough removed from the situation, to be honest about whether therapy had helped her son, she shrugged and said: “Therapy, or growing up. Who knows?”) But parents who knew they needed help do remember what led them to ask for it, and what they learned may help those of us who still aren’t sure.

I can identify the moment with my daughter very clearly. She was and always has been a quiet and introverted person and I let that shield me from how unhappy she was. But one day we went to the beach and a friends older daughter taught her to boogie board. She was 6 at the time and really enjoyed herself. But I had the horrifying realization that I hadn’t seen her actually smile in months let alone laugh. I made an appointment the next day. — jubacat

That would be enough for me, too.