Animals increasingly are being used to assist patients with mental disorders, as evidence grows that they can help people with autism, PTSD and other conditions function in their everyday lives.

The assistants are usually dogs but sometimes can include miniature horses, chinchillas or other animals. 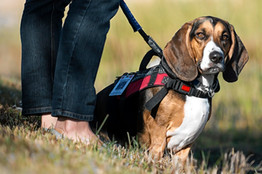 Bamboo is a bassett hound-beagle mix. Josh Ritchie for The Wall Street Journal 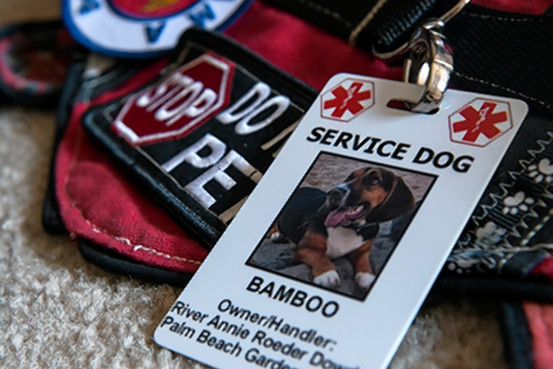 Bamboo gives Roeder something calm to focus on until the attack passes. Josh Ritchie for The Wall Street Journal

Some are highly trained psychiatric-service animals that, for example, might help autism patients improve their social skills and interactions.
Others are household pets called emotional-support animals, or ESAs, a fast-growing type, partly because they require no special training, just a doctor's note saying the pet helps the patient.
Some owners of emotional-support animals say having the pets allows them to reduce how much medication they take. But ESAs also have spurred controversy, in part because some airlines and restaurants that typically bar pets will permit entrance to emotional-support animals, a development that is seen to encourage abuse.
There is no national certification program or registration for any type of assistive animal.

Annie Roeder, 29, of Palm Beach Gardens, Fla., has dissociative disorder, a condition that involves sporadic memory loss, feelings of detachment from oneself and perceptions that people and objects aren't real. She says her psychiatric-service dog, Bamboo, a basset hound-beagle mix, helps her when she is having an anxiety attack or feels out of touch with reality. The dog alerts Ms. Roeder when the episode is occurring and will lay down on her lap to stabilize her. Ms. Roeder says she doesn't know whether Bamboo is detecting a change in her actions or something else. "He just knows" when an attack is coming, she says.

Ms. Roeder says she used to be afraid to spend much time in public in case she had a dissociative episode. But since getting Bamboo 2½ years ago she now feels safe to engage in regular activities outside her home.

Identifying health benefits from animal-assisted therapy, as the field is known, comes mostly from observational studies, as the practice doesn't lend itself to traditional randomized, controlled experiments. And for designations like emotional-support animals, where there isn't training or regulation, the lack of standards makes it difficult to study the effects on health.

Still, the pool of studies that have been done increasingly suggests that animal-assisted techniques can be beneficial, says James Serpell, director of the Center for the Interaction of Animals and Society at the University of Pennsylvania. He says some research indicates that animal interventions can help encourage social interactions and reduce behavioral outbursts in some children with autism-spectrum disorders as effectively as other conventional treatments, including cognitive-behavioral therapy. However, the animal techniques are less effective than other methods at helping with conditions such as anxiety, depression or fear, the research has shown.
"The balance points to these types of interventions working surprisingly well for some groups," says Dr. Serpell.

A review of animal-assisted interventions on children with autism, published in the Society for Companion Animal Studies Journal in 2009, suggested that an assistive animal in the home can help facilitate daily routines and reduce behavioral outbursts. Dr. Serpell says it isn't clear why animals appear to enhance social behavior. A possibility is that the animal's presence induces neurochemical changes, like an increase in oxytocin hormone, which is then thought to improve social interactions.

Psychiatric-service training can take years and the animals may cost as much as thousands of dollars. Dogs have been trained to detect when someone with post-traumatic stress disorder, or PTSD, is experiencing a flashback to a traumatic situation.
The animals, which possibly detect changes in patients' motion, routine and body language, help them get out of it by nudging them or laying on them. Other evidence suggests that animals can assist people with schizophrenia who are hallucinating. By looking at the dog's reaction to outside events, the patient can better distinguish what is real and what is a hallucination.

Research has found that having a pet confers health benefits on most owners, with or without an illness. Studies have shown that being around pets is associated with lower blood pressure and heart rate, and fewer symptoms of anxiety and depression. Therapists and hospital volunteers take advantage of that by using therapy animals to bring comfort and other psychological benefits when visiting patients.

Emotional-support animals are the least studied of the types of assistive animals. These are private pets for which a doctor or other health-care professional writes a letter explaining why the owner needs the animal.

The increase in number of pets deemed to be emotional-support animals concerns experts in the assistive-animal community, who fear that some people are taking advantage of the designation. 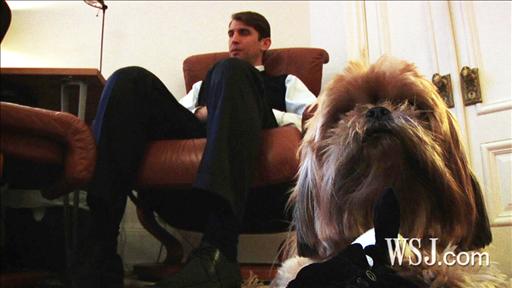 Therapists use 'canine assistants' to comfort and cheer up their patients. WSJ's Christina Tsuei sees how psychiatrist Drew Ramsey teams up with his four-year-old shih tzu Gus.

"I have a great deal of concern about ESAs of people abusing the categories to take them into restaurants and particularly in airplanes," says Mary Burch, director of the American Kennel Club, a nonprofit dog registry that runs dog shows and has developed the Canine Good Citizen Program, a dog-industry standard for obedience behaviors. "People with disabilities have struggled for public access rights for decades…and they may lose them if we abuse the system."

The biggest concerns are about bad behavior and hygiene, say officials in the service-animal industry, which trains animals to assist psychiatric patients and blind people. Because therapy dogs and emotional-support animals aren't required to undergo any training, they may react when they see another dog, for instance. In addition, airlines often have caps on the number of animals on a flight, so if an individual who doesn't have a genuine therapeutic need brings a pet on board labeled as an ESA, other people with legitimate disabilities may be prevented from bringing their dogs.

Carol Maa adopted Bourbon, a King Charles spaniel-dachshund mix, last year at a time her job was creating a lot of stress in her life. She says she struggled with the idea of getting Bourbon recognized as an emotional-support animal, concerned about how other people might react. In the end, her therapist agreed to write a letter designating the dog as her ESA, the only requirement to making a pet an emotional-support animal.

Ms. Maa, who is in her early 30s and lives in Sunnyvale, Calif., says Bourbon flies with her often on her business trips, which helps her control feelings of claustrophobia on the airplane.
Ms. Maa says some people choose to take medication to reduce stress. But "for some of us who live our lives otherwise, without drugs, this is a viable alternative," she says.

Write to Shirley S. Wang at This email address is being protected from spambots. You need JavaScript enabled to view it.