We read a lot about new moms suffering from post-natal depression, but it’s increasingly common for men to suffer and it can have devastating effects on relationships. 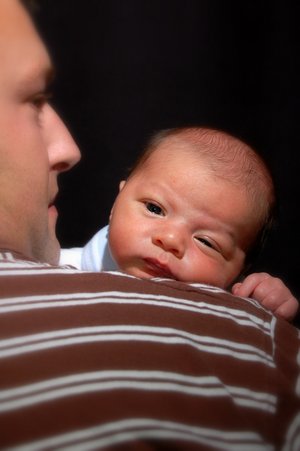 Causes of depression in men

"A man can feel excluded when his partner has a child," says Cape Town photographer Deryck van Steenderen, 35. When Deryck’s second child, David, was born, his partner fell very strongly in love with the little boy and Deryck felt shut out. His marriage took a battering and divorce followed soon after David’s birth. Trying to cope with the divorce and financial insecurity, Deryck found himself plunged into depression.

Deryck doesn’t know whether to label it postnatal depression (PND) but what he has suffered from may well be. Research shows that while paternal PND is neither a commonly recognised condition nor a term used often, a sizeable proportion of men appear to suffer from depression after the life-changing event of their child’s birth.

So why do men suffer from depression after the birth of a much-wanted baby? Mark Kahn, a clinical psychologist in private practice in Gauteng, believes that depression is the result of unrealistic expectations of an event.

The birth of a child is fertile ground for fantasies; there are expectations about the child and what it will be like to parent and have a family. But these expectations or fantasies can be abruptly dashed when the child is born, and the realities of day-to-day parenting set in. It is common for the mother, especially if she is breastfeeding, to develop a close bond with the infant, and, without realising it, to withdraw from her partner in the process. This can put unbearable pressure on the father, states Kahn, and men commonly withdraw rather than address such issues.

Deryck thinks he is a typical male. "I don’t like to talk about things," he says. But, realising he had a problem, he went to therapy and now says it was "100 per cent worth it. It helped me put things back into perspective," he says. When it comes to therapy, Mark Kahn draws from the teachings of Dr John Demartini, an inspirational speaker and author. "Healing happens when our expectations are matched by reality," explains Kahn.

It’s important to learn to balance the fantasy with reality, he says. He tries to achieve this by encouraging the man to look at similar situations in his life; for example, the start of high school or his first job. In those cases, expectations of the event – common feelings that life would finally start or be perfect – are compared with the reality.

The incidence of general depression is twice as high in women than men, confirms psychiatrist and director of the South African Depression and Anxiety group Dr Dora Wynchank. She acknowledges that men could be under-diagnosed with this condition. Male depression often presents differently, in the form of substance abuse, over-work or alcoholism. The anti-depressant for men "is to have an affair, rather than taking prozac or seeing a therapist", says Kahn. Men are reluctant to talk about and work with their depression. Instead, they tend to act out their feelings in behaviours that make them feel better.

Affect on the kids

There’s no debate that the emotional state of parents has direct bearing on their children. British medical journal The Lancet reports that maternal post-natal depression can limit a woman’s capacity to care for her baby, and could be "associated with delayed social, behavioural, cognitive, and physical development in growing children". Also, teenage children of depressed fathers are more likely to experience mental illness.

But how does a father’s mental state affect his infant offspring? Children whose fathers suffer from depression during the post-natal period are more likely to experience emotional and behavioural problems during the pre-primary years, reports The Lancet. The researchers offer several potential explanations for this phenomenon. A father’s depression might affect the way he interacts with his children or there may be an indirect effect. Where there is marital conflict and depression, studies have shown that there is an impact on children’s behavioural problems. The effect of a father's depression was found to be stronger with boys than girls.

It’s been four years since Deryck’s depression but he now describes his relationship with his son as "connected".

The arrival of a baby brings enormous change. It’s the start of a long and rewarding journey but one that is full of hard days and long nights. For men, who are commonly brought up to tough it out and bury their feelings, the emotions of new parenthood can be hard to manage. "There is a lot of support for women suffering from post-natal depression, but a man has virtually no support," says Deryck. If you, or your partner, think you may be suffering from post-natal depression, seek help.

For men suffering from post-natal depression, consider the following:

* Recognise and monitor symptoms: are they worse at weekends or certain times of the day? This helps assess whether any form of intervention brings relief and to see which factors exacerbate the depression.
* Take some time out from the responsibilities of family life, especially to exercise.
* Ensure the couple forms the central family unit, and not the mother and baby.
* Try to maintain sexual and personal intimacy.

Only a call away from help
We hear so much about post-natal depression, but what is it? According to the Post Natal Depression Support Association (PNDSA), at least one in 10 new mothers has clinical depression and anxiety during pregnancy and in the first year after the birth of a baby. There are no numbers on how many men may suffer from PND.

It’s worth asking yourself, do you feel: