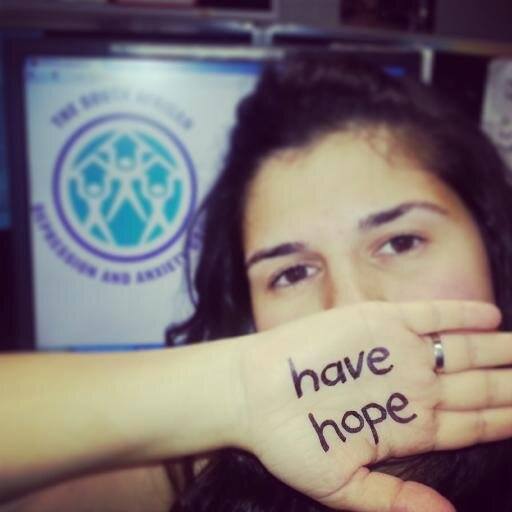 “There’s no point to this hell called life is there? It never gets better! No-one understands how I feel. They think I’m making it up – just being dramatic and looking for attention. I’ve had enough.” For many teens suffering from depression, loneliness and isolation are part of their daily struggle. “I felt so alone, like no one could ever understand what I was going through. I started asking myself if I was being pathetic and dramatic.”

Teens like Lungi (16) are not alone. Research shows that 1 in 5 teens have considered suicide and almost 17% have formulated a plan to take their lives. The teen years can be emotionally turbulent and stressful. Teens face pressures to succeed, fit in, family and financial stress, loss and trauma, and many struggle with self-esteem issues, self-doubt, and feelings of alienation.

The 16th February marked the start of National Teen Suicide Prevention Week. The South African Depression and Anxiety Group (SADAG) runs the national teen suicide prevention line (0800 567 567 or SMS 31393) which is open 7 days a week. In South Africa, 9.5% of teen deaths are due to suicide. According to Researcher Prof Schlebusch, the 15-19 year age group is most at risk for suicide.

Social media is a wonderful medium to create awareness and support. SADAG will be launching the “We Care” Campaign for Teen Suicide Prevention Week on the 16th February until the 23rd February and invites everyone to get involved.

Write a message of hope – “SADAG cares”, “Have Hope” or “Speak out”- on your hand and post on Facebook, Twitter or Instagram to raise awareness about teen suicide. Celebrities like Gareth Cliff, Danny K, Mark Pilgrim, Kerry McGregor, Sade Gilliberti, Roxy Burger, Hayley Owen, Sureshnie Rider, Chiano Sky, Graeme Watkins and Matthew Booth amongst others have lent their support to this campaign.

To see how you, your school or office can get involved – please contact SADAG on 011 262 6396 or www.sadag.org  to get more details. It is everyone’s responsibility to empower youth and our communities in order to prevent senseless, preventable tragedies like teen suicide. Not all communities have access to specialised mental health resources, but through SADAG, everyone has access to help, support and information.

Suicide is a desperate attempt to escape unbearable pain and suffering. “Blinded by feelings of self-loathing, hopelessness, and isolation, a severely depressed person can’t see any way of finding relief except through death”, explains psychologist Liane Lurie.

“They wish there was an alternative to committing suicide, but they just can’t see one.” This is why SADAG’s teen suicide prevention programme, and National Teen Suicide Prevention Week, is so vital – it gives teens hope for an alternative.

Through SADAG’s national school-based programme, “Suicide shouldn’t be a secret”, approximately 700 000 teens have been made aware of the signs, symptoms of depression and suicide, and critically, how to intervene.

Lungi spoke to friends about how she was feeling, and even tried to talk to an aunt about the fact that she wanted to kill herself. “No-one really listened to me – they thought I was just looking for attention.”

But SADAG has shown that 80% of teen who are suicidal have given some kind of warning, just like Lungi did. Friends are in a key position to pick up on warning signs that a friend or classmate is depressed or suicidal. “It is very important never to take warning signs lightly or promise to keep them secret”, says Lurie.

There are so many youth who suffer in silence, scared of being judged, unsure how to talk about how they are feeling. Often, families are the last to know. TV personality, Sade Gilliberti, knows this from first-hand experience. “My depression started early, and when I was depressed my parents didn’t know. When my father found out he was shocked, but he supported me.” Family support is a key factor in teen health.

One of the hardest things to do is speak to a depressed teen – they are moody and emotional – and many people feel uncomfortable with the topic of suicide. There are many myths and misconceptions about how to deal with a depressed or potentially suicidal friend, and too often victims of suicide are blamed and their families and friends are stigmatised. People don’t communicate openly about suicide with the result that suicide is left shrouded in secrecy.

“Many youth wonder if it’s a good idea to say anything to a friend if you notice something wrong”, says Chambers. “They worry about their friend becoming angry but it is always better to risk the friendship that to risk the friend. Get help before someone you care about does something that can’t be reversed.”

Death from youth suicide is only part of the problem. For every completed suicide, there are an estimated 20 attempted suicides. And far too often, these go unnoticed.

If you or someone you know is having thoughts of suicide, or if you would like to find out more about teen suicide prevention week, please contact SADAG Meryl, Cassey or Naazia on 0800 567 567 or 011 262 6396 or visit them www.sadag.org