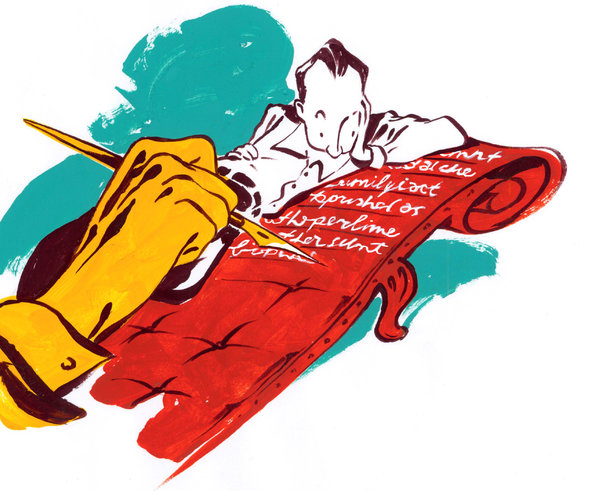 BOSTON — David Baldwin wasn’t sure how he had come across the other day in group therapy at the hospital, near the co-op apartment where he lives with his rescue cat, Zoey. He struggles with bipolar disorder, severe anxiety and depression. Like so many patients, he secretly wondered what his therapist thought of him.

But unlike those patients, Mr. Baldwin, 64, was able to find out, swiftly and privately. Pulling his black leather swivel chair to his desk, he logged onto a hospital website and eagerly perused his therapist’s session notes.

The clinical social worker, Stephen O’Neill, wrote that Mr. Baldwin’s self-consciousness about his disorder kept him isolated. Because he longed to connect with others, this was particularly self-defeating, Mr. O’Neill observed. But during the session, he had also discussed how he had helped out neighbors in his co-op.

“This seems greatly appreciated, and he noted his clear enjoyment in helping others,” Mr. O’Neill wrote. “This greatly assists his self-esteem.”

A smile animated Mr. Baldwin’s broad, amiable features. “I have a tough time recognizing that I’ve made progress,” he said. “So it’s nice to read this as a reminder.”

Mental health patients do not have the ready access to office visit notes that, increasingly, other patients enjoy. But Mr. Baldwin is among about 700 patients at Beth Israel Deaconess Medical Center who are participating in a novel experiment.

Within days of a session, they can read their therapists’ notes on their computers or smartphones. The hope is that this transparency will improve therapeutic trust and communication.

“We’re creating a revolution,” said Dr. Tom Delbanco, a professor of medicine at Harvard and a proponent of giving patients access to notes by therapists as well as by physicians. “Some people are aghast.”

The pilot project has raised questions in the mental health community. Which patients will benefit and which might be harmed? How will the notes alter a therapeutic relationship built on face-to-face exchanges? What will be the impact on confidentiality and privacy?

And the project presents difficult choices for those who argue for parity between medical and mental health patients. Should patients with schizophrenia, for example, who may stop taking their medication after reading that they are doing well, have the same access to treatment notes as those with irritable bowel syndrome?

But the lingering underlying question is, do patients really want to know what their therapists think? Dr. Kenneth Duckworth, who is the medical director of the National Alliance on Mental Illness, an advocacy group, said: “I’ve offered to share my notes with patients and they’ll say, ‘No, I’m good.’ But it’s a good concept that should be researched.”

The practice is so new that it is too early for a comprehensive evaluation. The Department of Veterans Affairs, which began making medical and mental health records available online last year, is only just beginning to study the effect on mental health patients.

Older studies from psychiatric wards where patients read charts with doctors found that the patients were confused or offended by the content. But as doctors helped interpret their notes, patients began participating more in their care and trusting their team.

Although Beth Israel therapists report that some patients have no interest in reading their notes, responses from a few have been positive and powerful.

Stacey Whiteman, 52, a former executive secretary in Needham with multiple sclerosis, faces growing cognitive as well as physical difficulties. The disease has shaken her self-image and relationships; her psychological health affects her willingness to manage the disease. She finds that her medical and mental health notes complement each other.

“Yes, the therapy notes can be hard to read, and sometimes I wonder, ‘Really, I said all of that?’ ” she said. “But there’s no question that reading this stuff just charges you back up to moving forward.”

While such a program may be feasible in larger systems like Beth Israel, a Harvard hospital, some solo practitioners fear it may require too much time and technological sophistication.

But Peggy Kriss, a psychologist in Newton, is an early adopter. For over a year she has maintained a website with private pages for patients on which she posts session notes, as well as articles, videos and meditations.

Toward the end of each session, she and the patient begin the note together defining the key points that have been raised.

Dr. Kriss said that for most of her patients, online notes have become the new normal. One described them to her as a security blanket between appointments.

Some write replies. “An O.C.D. patient told me I was spelling things wrong,” Dr. Kriss said. “So I said, ‘I’m just modeling anti-perfectionism for you.’ ”

The Beth Israel project grew out of OpenNotes, a program by Dr. Delbanco and his colleagues that made physicians’ notes accessible to 22,000 patients at three institutions. A 2011 study showed that patients responded positively and became more involved in their care.

More systems are adopting the model. At least three million patients now have swift access to office visit notes, including observations and recommendations.

But even those institutions have hesitated to share mental health notes. Critics have raised concerns about whether reading notes could prompt anxiety and even rejection of treatment. What will happen if the patient posts the notes on Facebook, inviting comment?

Proponents of access point out that such notes, which include extensive diagnostic reports, are already available to other doctors and to insurers.

Although patients have long had the right to their records, the process to obtain copies can be protracted. If a doctor thinks that reading notes would be harmful to the patient or others, they can be withheld.

Mindful of such pitfalls, the Beth Israel psychiatrists have offered notes initially to only 10 percent of patients. Clinical social workers are making notes more widely available, though some therapists have temporarily opted out. Nina Douglass, a social worker in the ob-gyn clinic, worries about patients with abusive partners. If the abuser insisted on reading the notes, the patient could be in danger.

“I can imagine that our work can be deepened and enhanced through people reading their notes,” Ms. Douglass said. “But one size doesn’t fit all.”

Mental health notes have very different readers: the therapist, who may use them as a memory prompt; other doctors treating the patient; insurers; and now the patient. Writing a note with necessary information for all can be daunting.

Mr. O’Neill, the social work manager, is pressing therapists to use straightforward descriptions. “I used ‘affect dysregulation,’ and a patient said, ‘What on earth is that? Are you saying I’m totally crazy?’ ” he said. “It just means they can get upset. So why not use the word ‘upset’?”

“Diagnostic language is used among doctors to describe features of a mental illness,” said Dr. Brian K. Clinton, an assistant professor at Columbia University Medical Center who has written about sharing records. “I would be willing to discuss with a patient what I think. It’s a better way to communicate than a note I wrote for other doctors.”

But Dr. Michael W. Kahn, an assistant professor of psychiatry at Harvard Medical School who wrote about the project in JAMA, said that if the therapist explained the diagnosis, some patients might feel relieved, knowing their behavior fits a pattern that others also experience.

Dr. Glen O. Gabbard, a psychiatrist and professor at Baylor College of Medicine, said that opening notes to patients might have a chilling effect on doctors.

“A psychiatrist would be less likely to put down anything he is musing about as diagnostic possibilities or write about what he feels the patient is leaving out,” he said.

Mr. Baldwin’s longtime friends know about his harrowing battles with mental illness: The hospitalizations. The manic episodes. The depression. The anxiety so crippling that two years ago, at a Costco parking lot, he couldn’t get out of the car.

As he withdrew into his apartment, pints of ice cream, Zoey, and the telephone became his constant companions. During the worst sieges of anxiety, he would call a few friends three, four times a day.

That is the man they recall, he recounted in his freshly tidied apartment. Its décor is hopeful: a multicolored rug, violet curtains, a jaunty lime-green wall.

And so is Mr. Baldwin. He is trying to lose weight, maybe someday have a new man in his life.

He clicked open another therapy note.

Mr. Baldwin “is continuing to try to push himself to get out more and to be more socially connected even while his emotions tell him to do the opposite,” Mr. O’Neill wrote, adding that his patient is “clearly making good, and even courageous, efforts on a number of fronts.”

Mr. Baldwin, who celebrated his birthday recently with a museum lecture, movie and dinner, flushed with pride.

“I’m going to email this to my friends,” he said.