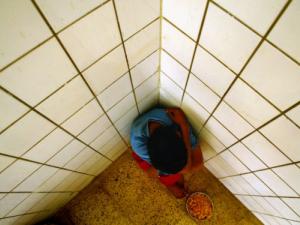 REUTERS The country doesnt have enough healthcare practitioners to treat the large number of citizens who are mentally ill. File photo: Yannis Behrakis
Johannesburg - The Health Department is not doing quite as well as it thinks when it comes to mental health professionals.
The ministry thinks it’s doing 10 times better than it actually is.

Minister of Health Dr Aaron Motsoaledi recently told Parliament there were 0.32 psychiatrists employed by his department per 10 000 people in and 0.7 clinical psychologists per 10 000 people.

He was replying to a question by DA MP Dr Heinrich Volmink.

Motsoaledi also gave the actual numbers of those employed: 207 psychiatrists and 364 psychologists nationally.

Given that the mid-year population estimate for last year was 52 982 000 people (the numbers the ministry based its calculations on), something seemed a little odd.

The Health Ministry didn’t respond to The Star’s request for clarification, but the Institute for Security Studies (ISS) explained the mistake.

The ISS manager for the crime and justice hub, Lizette Lancaster, said the ratio of psychiatrists was not 0.32 but 0.039 per 10 000 people.

The department’s mistake appeared to be because it added the provincial ratios to get a national ratio, rather than calculating the national number of employees against the national population total.

Those 571 psychiatrists and psychologists are the actual number of people employed; the number of posts is higher as the vacancy rates are high.

There also appear to be errors in the ministry’s vacancy rate calculations, as the Limpopo figures indicate the 67 psychologists hired are filling just 13 percent of the vacant posts, which would give a total of 521 posts for that province. This compares with the Western Cape’s total of 38 posts and Northern Cape’s 11.

This sort of error has implications for government planning and funding, as the department may believe it does not need as many mental health professionals as it does.
Crime commentators have repeatedly called for an increase in social workers and mental health professionals as just as important – if not more – than hiring more police.
Lancaster reiterated this point.

“South Africa requires a multidisciplinary approach to reduce violence. This approach needs to have targeted and evidence-based interventions at different levels of society most notably at individual, family and community level,” she said.

“It would be useful if the Department of Health told the cabinet how it determines how many mental health professionals it requires per province and per health district and how it makes these professionals more accessible to communities.”

Motsoaledi said the department did not have a target for the number of psychiatrists and psychologists to hire per 10 000 people.

“The Department of Health has embarked on a process to develop workforce staffing norms to ensure equitable distribution of human resources for health,” Motsoaledi said in his reply to Parliament.

“The World Health Organisation Workload Indicators of Staffing Need tool has been adopted and is currently being used to determine the categories of human resources we need. A report will be available once this work has been completed.”

Even on the basis of the ministry’s statistics presented to Parliament, there is a shortage.

The DA, which didn’t notice the miscalculations, called the situation a “massive shortage of mental health professionals” and said that, based on the minister’s figures, North West, the Northern Cape, Limpopo and Mpumalanga were hardest hit.

“Limpopo and Mpumalanga have only 24.2 percent and 33 percent of the vacancies filled for psychiatrists, respectively, while North West has only 31 percent of the psychologists it needs,” said Volmink.

“This means while the disease burden continues to increase, with an estimated one in every three South Africans suffering from some form of mental illness, our health system is unable to properly address and treat the growing number of patients.

“This not only has serious implications for the health and quality of life of these individuals, but may also violate their constitutional right to access health services.”

Volmink said he would write to the minister to ask for a plan to address the shortage of such professionals.

“The DA will, in its letter, ask the minister to commit to a date by which he will table a full report and detailed plan relating to the recruitment and retention of mental health professionals. This is a matter of urgency, as a failure to act will perpetuate the suffering of thousands of South Africans.”