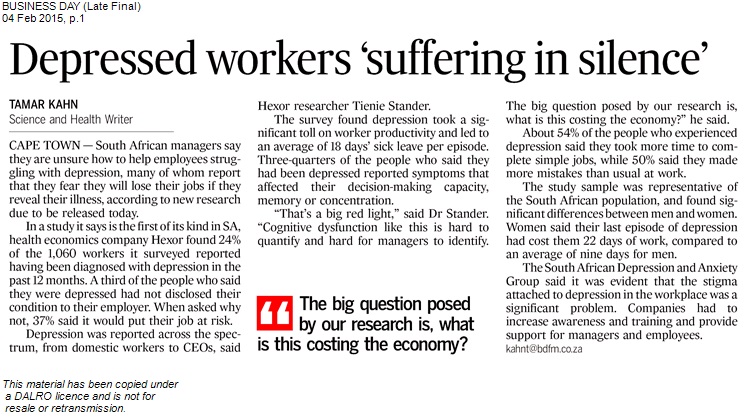 CAPE TOWN — South African managers say they are unsure how to help employees struggling with depression, many of whom report that they fear they will lose their jobs if they reveal their illness, according to new research due to be released today. In a study it says is the first of its kind in SA, health economics company Hexor found 24% of the 1,060 workers it surveyed reported having been diagnosed with depression in the past 12 months. A third of the people who said they were depressed had not disclosed their condition to their employer. When asked why not, 37% said it would put their job at risk. Depression was reported across the spectrum, from domestic workers to CEOs, said Hexor researcher Tienie Standen The survey found depression took a significant toll on worker productivity and led to an average of 18 days' sick leave per episode. Three-quarters of the people who said they had been depressed reported symptoms that affected their decision-making capacity, memory or concentration. "That's a big red light," said Dr Stander. "Cognitive dysfunction like this is hard to quantify and hard for managers to identify. The big question posed by our research is, what is this costing the economy?" he said. About 54% of the people who experienced depression said they took more time to complete simple jobs, while 50% said they made more mistakes than usual at work. The study sample was representative of the South African population, and found significant differences between men and women. Women said their last episode of depression had cost them 22 days of work, compared to an average of nine days for men. The South African Depression and Anxiety Group said it was evident that the stigma attached to depression in the workplace was a significant problem. Companies had to increase awareness and training and provide support for managers and employees. This email address is being protected from spambots. You need JavaScript enabled to view it. The big question posed by our research is, what is this costing the economy?