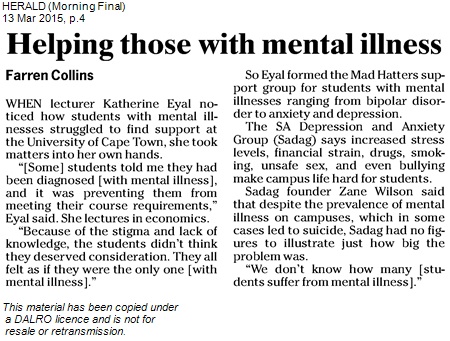 WHEN lecturer Katherine Eyal noticed how students with mental illnesses struggled to find support at the University of Cape Town, she took matters into her own hands. "[Some] students told me they had been diagnosed [with mental illness], and it was preventing them from meeting their course requirements," Eyal said. She lectures in economics. "Because of the stigma and lack of knowledge, the students didn't think they deserved consideration. They all felt as if they were the only one [with mental illness]." So Eyal formed the Mad Hatters support group for students with mental illnesses ranging from bipolar disorder to anxiety and depression. The SA Depression and Anxiety Group (Sadag) says increased stress levels, financial strain, drugs, smoking, unsafe sex, and even bullying make campus life hard for students. Sadag founder Zane Wilson said that despite the prevalence of mental illness on campuses, which in some cases led to suicide, Sadag had no figures to illustrate just how big the problem was. "We don't know how many [students suffer from mental illness]."