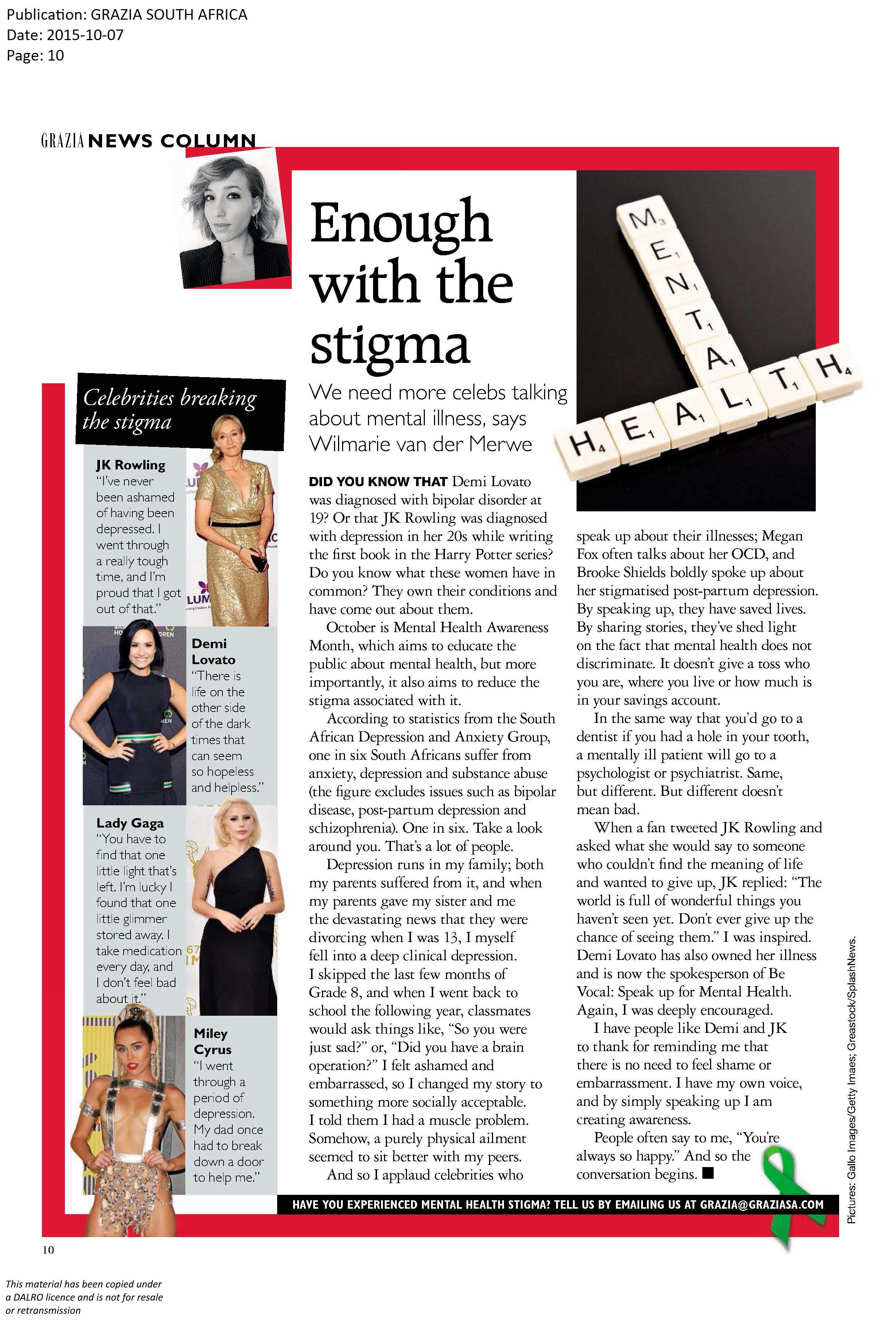 Wilmarie van der Merwe GRAZIA N EWS tSultltl---- IO JK Rowling 'Tve never been ashamed of having been depressed. I went through a really tough time, and I'm proud that I got I. out ofthat." i Lady Gaga "You have to find that one little light that's left. I'm Lcky I found that one little glimmer stored away. I every day, and I don't feel bad ii/ Celebrities breaking " stigma U litm- Demi Lovato "There is life on the other side of the dark " times that can seem so hopeless and helpless." Miley Cyrus "I went It ti, through a period of " depression. ' My dad once had to break down a door . to help me." Enough with the stigma We need more celebs talking about mental illness, says Wilmarie van der Merwe MD YOU KNOW THAT Demi Lovato was diagnosed with bipolar disorder at l9? Or that JK Rowling was diagnosed with depression in her 20s while writing the first book in the Harry Potter series? Do you know what these women have in common? They own their conditions and have come out about them. October is Mental Health Awareness Month, which aims to educate the public about mental health, but more importantly, it also aims to reduce the stigma associated with it. According to statistics from the South African Depression and Anxiety Group, one in six South Africans suffer from anxiety, depression and substance abuse (the figure excludes issues such as bipolar disease, post-partum depression and schizophrenia). One in six. Take a look around you. That's a lot of people. Depression runs in my family; both my parents suffered from it, and when my parents gave my sister and me the devastating news that they were divorcing when I was l3, I myself fell into a deep clinical depression. I skipped the last few months of Grade 8, and when I went back to school the following year, classmates would ask things like, "So you were just sad?" or, "Did you have a brain operation?" I felt ashamed and embarrassed, so I changed my story to something more socially acceptable. I told them I had a muscle problem. Somehow, a purely physical ailment seemed to sit better with my peers. And so I applaud celebrities who HAVE YOU EXPERIENCED MENTAL HEALTH mrth'ihti TELL US BY EMAILING US AT Ctutglralutil,ul@hl speak up about their illnesses; Megan Fox often talks about her OCD, and Brooke Shields boldly spoke up about her stigmatised post-partum depression. By speaking up, they have saved lives. By sharing stories, they've shed light on the fact that mental health does not discriminate. It doesn't give a toss who you are, where you live or how much is in your savings account. In the same way that you'd go to a dentist if you had a hole in your tooth, a mentally ill patient will go to a psychologist or psychiatrist. Same, but different. But different doesn't mean bad. When a fan tweeted JK Rowling and asked what she would say to someone who couldn't find the meaning of life and wanted to give up, JK replied: "The world is full of wonderful things you haven't seen yet. Don't ever give up the chance of seeing them." I was inspired. Demi Lovato has also owned her illness and is now the spokesperson of Be Vocal: Speak up for Mental Health. Again, I was deeply encouraged. I have people like Demi and JK to thank for reminding me that there is no need to feel shame or embarrassment. I have my own voice, and by simply speaking up I am creating awareness. People often say to me, "You're always so happy." And so the conversation begins. I Pictures: Gallo Images/Getty lmaes; GreastocklSplashNews.