Johannesburg - Caroline Ncube’s mentally ill relative ran away from a Fochville house on Wednesday, where she had allegedly been left cold, hungry and without medication after being transferred there from Life Esidimeni Psychiatric Hospital in Joburg.

On Thursday, Ncube joined more than 50 others in a march to the Gauteng Department of Health to hand over a memorandum of their demands. 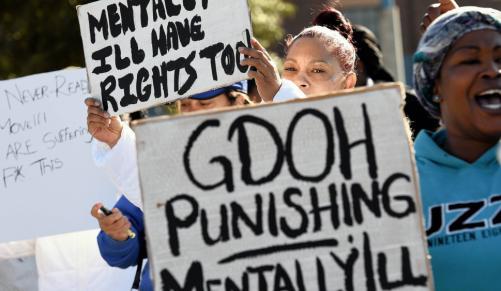 Concerned citizens and families of patients from the Life Esidimeni psychiatric hospital march to the Gauteng Department of Health. Picture: Chris Collingridge. Credit: THE STAR

Last month, The Star reported how some of the patients had disappeared to other facilities as the hospital prepared to close. Their families were not informed of their whereabouts.

Families on Thursday demanded that Health MEC Qedani Mahlangu provide them with details of each NGO where patients had been moved to, including what services were provided there and what qualifications the staff had.

They asked how the NGOs were funded and how they would be monitored, and wanted the department to consult them about where their relatives would be placed and for a reliable toll-free number so they could make enquiries or lodge complaints.

In October, Mahlangu announced that the department would terminate its contract with the hospital in favour of less restrictive, community-based environments.

Ncube said her mother’s cousin had been transferred to a home in Fochville last month without the family’s knowledge. Her relative, along with other patients, allegedly walked for four hours to a train station in order to escape the conditions in the home.

“They ate only one apple a night. They’d get hungry and cold. There’s no security there; it’s very dangerous,” Ncube said, referring to conditions at the house. She did not know which organisation the house belonged to.

Hillbrow resident Samuel (not his real name) said he didn’t know what he would do with his 19-year-old son once the hospital closed.

“He’s autistic. He can’t do anything for himself and he’s a danger to himself.

“It’s not easy to control him. Since he has been (at Esidi-meni) he has improved. Other places couldn’t control him.”

Samuel was concerned about what lay in store for his son and the effect it would have on the family.

Marion Conway said it would be impossible to find an NGO willing to care for her mother, who had treatment-resistant schizophrenia and needed 24/7 care.

John Stephens, a senior researcher from Section27, which had been supporting the families, said they had suffered significant trauma. “The process hasn’t been conducted in a dignified manner,” he said.

Departmental spokesman Steve Mabona said the department would continue working with relatives of patients at Esidimeni.

He said a committee had been established to facilitate further communication between relatives and the department, adding that the committee met regularly.

“It is regrettable that an impression is being created that the department has been underhanded in its dealings with families,” Mabona said.

He said 378 patients left at Esidimeni were yet to be placed and about 295 had been taken to Weskoppies and Sterkfontein psychiatric hospitals.

The rest had gone to NGOs, while a few had been discharged home at their family’s request.