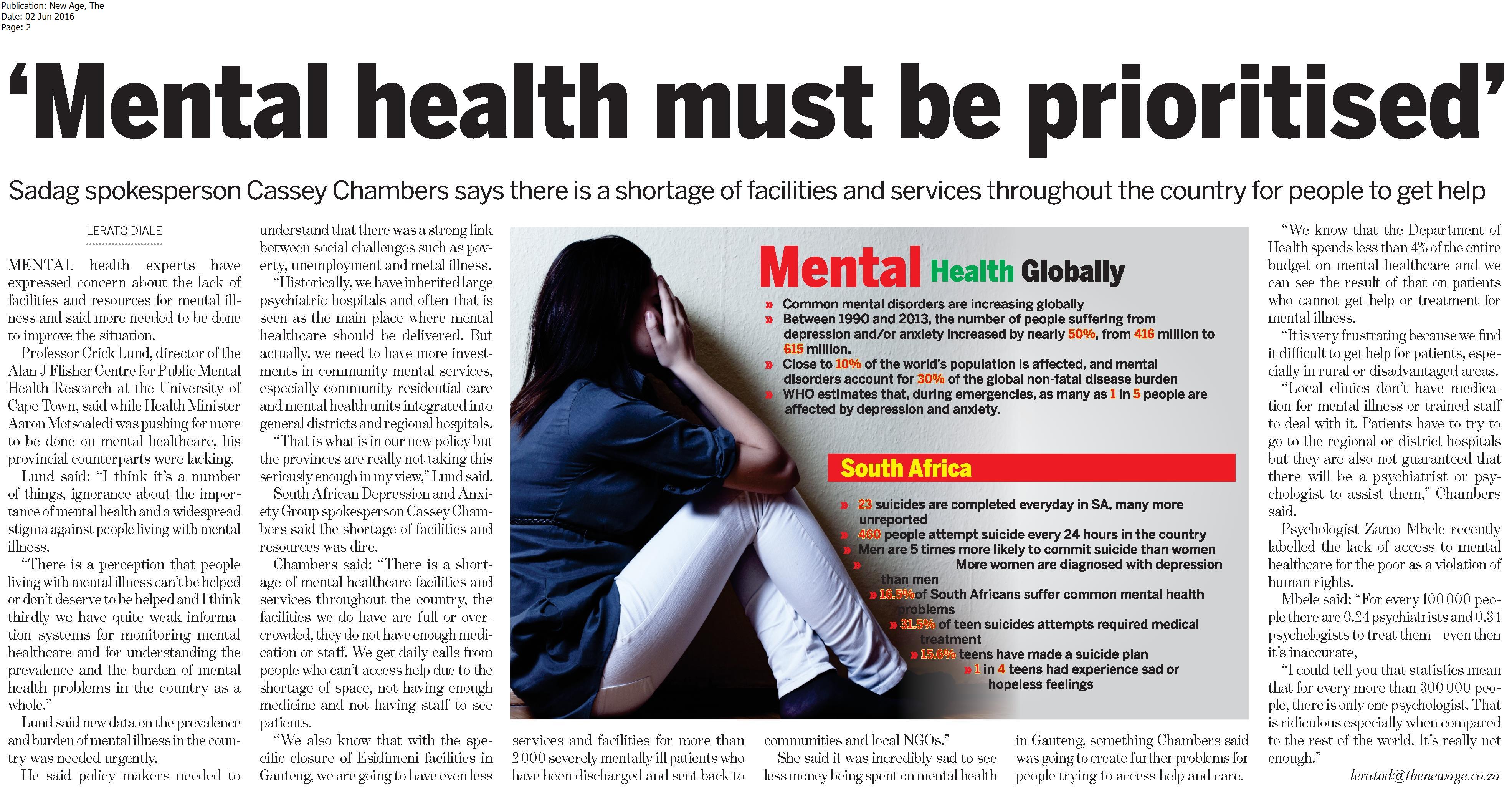 Sadag spokesperson Cassey Chambers says there is a shortage of facilities and services throughout the country for people to get help MENTAL health experts have expressed concern about the lack of facilities and resources for mental ill-ness and said more needed to be done to improve the situation. Professor Crick Lund, director of the Alan J Flisher Centre for Public Mental Health Research at the University of Cape Town, said while Health Minister Aaron Motsoaledi was pushing for more to be done on mental healthcare, his provincial counterparts were lacking. Lund said: "I think it's a number of things, ignorance about the impor-tance of mental health and a widespread stigma against people living with mental illness. "There is a perception that people living with mental illness can't be helped or don't deserve to be helped and I think thirdly we have quite weak informa-tion systems for monitoring mental healthcare and for understanding the prevalence and the burden of mental health problems in the country as a whole." Lund said new data on the prevalence and burden of mental illness in the coun-try was needed urgently. He said policy makers needed to understand that there was a strong link between social challenges such as pov-erty, unemployment and metal illness. "Historically, we have inherited large psychiatric hospitals and often that is seen as the main place where mental healthcare should be delivered. But actually, we need to have more invest-ments in community mental services, especially community residential care and mental health units integrated into general districts and regional hospitals. "That is what is in our new policy but the provinces are really not taking this seriously enough in my view," Lund said. South African Depression and Anxi-ety Group spokesperson Cassey Cham-bers said the shortage of facilities and resources was dire. Chambers said: "There is a short-age of mental healthcare facilities and services throughout the country, the facilities we do have are full or over-crowded, they do not have enough medi-cation or staff. We get daily calls from people who can't access help due to the shortage of space, not having enough medicine and not having staff to see patients. "We also know that with the spe-cific closure of Esidimeni facilities in Gauteng, we are going to have even less services and facilities for more than 2000 severely mentally ill patients who have been discharged and sent back to communities and local NGOs." She said it was incredibly sad to see less money being spent on mental health in Gauteng, something Chambers said was going to create further problems for people trying to access help and care. 'Mental health must be prioritised' LERATO DIALE Mental Health Globally Common mental disorders are increasing globally 11 Between 1990 and 2013, the number of people suffering from depression and/or anxiety increased by nearly ,from million to 615 million. a Close to of the world's population is affected, and mental disorders account for of the global non-fatal disease burden WHO estimates that, during emergencies, as many as : in people are affected by depression and anxiety. South Africa ?3 suicides are completed everyday in SA, many more nreported _ people attempt suicide every 24 hours in the country 5 times more likely to commit suicide than women More women are diagnosed with depression en of South Africans suffer common mental health ms f teen suicides attempts required medical ment teens have made a suicide plan I in 11 teens had experience sad or hopeless feelings "We know that the Department of Health spends less than 4% of the entire budget on mental healthcare and we can see the result of that on patients who cannot get help or treatment for mental illness. "It is very frustrating because we find it difficult to get help for patients, espe-cially in rural or disadvantaged areas. "Local clinics don't have medica-tion for mental illness or trained staff to deal with it. Patients have to try to go to the regional or district hospitals but they are also not guaranteed that there will be a psychiatrist or psy-chologist to assist them," Chambers said. Psychologist Zamo Mbele recently labelled the lack of access to mental healthcare for the poor as a violation of human rights. Mbele said: "For every 100 000 peo-ple there are 0.24 psychiatrists and 0.34 psychologists to treat them - even then it's inaccurate, "I could tell you that statistics mean that for every more than 300 000 peo-ple, there is only one psychologist. That is ridiculous especially when compared to the rest of the world. It's really not enough." leratod@thenewagescaza