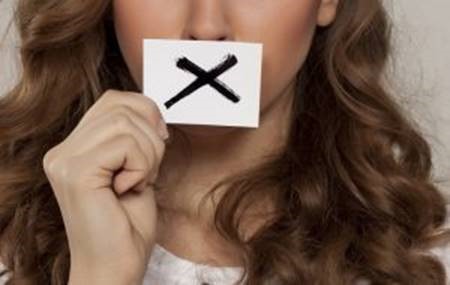 According to the U.S. Department of Health and Human Services, as many as one in five Americans will experience a mental health issue at some point in their lives. Of the nearly 60 million Americans who experience mental health concerns each year, many will never seek treatment for a variety of reasons including social stigma, cultural norms, and lack of access. In fact, a recent report published in the journal Psychological Science and the Public Interest found that an estimated 40% of individuals with serious mental health concerns either never receive care or start an intervention program without completing it.

The stigma surrounding mental health issues can be a significant barrier to care. Unfortunately, many people unknowingly contribute to the stigma simply with their everyday language choices. A poor choice of words not only stigmatizes, stereotypes, and creates unrealistic assumptions about certain people, but also can trivialize serious mental health conditions and their accompanying experiences.

While society tends to tread lightly around language concerning disabilities, race, or religion, it seems that we do not apply the same sensitivity to language involving mental health. For example, while you might be a little taken aback by someone who uses the word “retarded” to refer to a poor decision, you likely wouldn’t think twice about someone calling a peculiar behavior “crazy” or saying out loud that someone’s
“OCD” is the cause for an orderly office.

With May designated as Mental Health Awareness Month in the United States, we would like to encourage you to think twice about the language you use and how it may affect those one in five people who may be your neighbors, coworkers, and friends who experience mental health issues.

Show respect and consideration for those experiencing mental health conditions by avoiding these common stigmatizing phrases we hear in our daily conversations:

All too often people say “I’m so OCD” when referring to simple habits they may have regarding organization, such as arranging books a certain way on a bookshelf or keeping one’s own environment immaculately clean.

True obsessions and compulsions can be quite debilitating, involving persistent, unwanted thoughts, rituals, and behaviors, all of which are out of a person’s control.

As many as 27% of people experience some form of obsessive-compulsive behavior. By using the term to describe tidiness, we popularize the experience and make it appear less severe than it actually can be. Next time you find yourself tempted to say someone else is being OCD or claim it as an explanation for your own behavior, consider how you might more accurately share your observation or insight.

It’s not uncommon to hear people refer to themselves as ADHD or ADD when they are inattentive or easily distracted. Today’s high-tech world seems to be characterized by ever-shrinking attention spans, and it seems that people are always fiddling with their smart phones and jumping from one topic to another. However, this is not the same thing as attention-deficit hyperactivity.

Though these types of behaviors may be related to a lack of focus, an actual diagnosis of ADHD is far more complex.

People might casually refer to distracted behavior as ADHD or even go as far as to say that they’re ADHD when channel surfing or changing the radio station before a song finishes. Though these types of behaviors may be related to a lack of focus, an actual diagnosis of ADHD is far more complex and has less to do with boredom and more to do with genetics, neurotransmitters, and electrical activity in the brain. In fact, a major distinguishing characteristic of ADHD is impulsivity, which probably isn’t present in most cases where people erroneously claim ADHD as the source of their inattention.

At some point, you’ve probably heard someone refer to a past lover (or friend, or roommate) as a psycho. People typically use this phrase to refer to someone engaging in erratic or irrational behavior, which in reality is far from psychotic.

Psychosis is a serious mental health condition by which a person loses contact with reality and may experience hallucinations and delusions. An estimated 3% of people experience psychosis, which makes it far less prevalent than the many people who claim to have psychotic past lovers might indicate. Try not to downplay the seriousness of this condition by using the term frivolously.

‘The Weather Is So Bipolar Today.’

Sure, it may snow in the morning, warm up for an hour, and then snow again all afternoon, but it is impossible for the weather to literally be bipolar. Likewise, it’s highly unlikely that your friend having a few ups and downs today is actually experiencing the often debilitating symptoms of bipolar. Using the term bipolar in these contexts misrepresents the experience and can minimize the condition.

A person experiencing bipolar is likely to experience serious shifts in mood that may range from dangerously euphoric to suicidal. These drastic changes can seriously hinder one’s life if left untreated. Instead of using the term bipolar, consider describing the weather as unstable or unpredictable, and referring to your friend as being in a bad mood or having a hard time.

‘This Makes Me Want to Kill Myself.’

You fail your math exam and you exclaim in frustration, “I just want to die.” Or something else mildly unfortunate happens and you casually say, “This makes me want to kill myself.”

According to the Centers for Disease Control and Prevention, suicide is the 10th leading cause of death in the United States with almost 40,000 Americans dying from suicide each year. People who commit or attempt suicide do not necessarily want to die; rather, they may want to be free of pain.

If you find yourself upset with your circumstances and wanting to express your frustrations, be mindful of your word choice in this matter. It’s very likely someone in your vicinity has been touched by suicide in some way.

‘Stop Being So Paranoid.’

Paranoia is a symptom of many mental health conditions and can be detrimental to a person’s life. True paranoia can cause people to have serious trust issues and unwarranted fear and anxiety, as well as feelings of persecution and exaggerated self-importance.

When you find a friend may be worrying too much or over-analyzing something, avoid using the term paranoid and replace it with other descriptive words such as mistrusting or fearful.

You might find yourself saying something like, “I’m so addicted to this TV show” to mean that you really enjoy it. But most likely, you are not truly addicted to it. Addiction is a serious mental health issue that can destroy lives, both of the person addicted and that person’s loved ones.

There’s a considerable difference between appreciating or enjoying something and being addicted to it. Be mindful of this distinction when you speak.

Although more than 23 million Americans experience some form of substance abuse, up to 40 million additional Americans are indirectly affected by it. These numbers do not account for non-substance addictions such as gambling, spending, or sex addiction.

There’s a considerable difference between appreciating or enjoying something and being addicted to it. A person experiencing addiction may want to stop engaging in an addictive behavior, but may feel unable to do so regardless of its continued negative consequences. Be mindful of this distinction when you speak, so as not to disparage the serious problems addiction can cause.

It’s becoming far too common to use the word crazy and related synonyms lightly. People may think that using these terms to describe behavior that seems odd, eccentric, or strange is harmless, but it can be damaging to the self-esteem of those experiencing real mental health conditions.

The stigma alone is enough to make people feel isolated, keep them from seeking the treatment they truly need, or cause them to completely deny their symptoms altogether. But these terms, often used in a manner that belittles those who actually experience mental health issues, reinforce the dangerous stigma of mental health issues by painting them in a derogatory way.

Words Have Power; Think Before You Speak

Avoiding stigmatizing terms and phrases that cause shame, minimize experiences, and misrepresent reality can help eliminate a major obstacle to treatment. It’s not simply about being politically correct, requiring that you tiptoe around your words; the point is to simply stop and think about what you say and be mindful of how your choice of words may affect others.

If you would like to learn more about how you can raise awareness of mental health conditions and help remove stigma, check out our blog this month or visit Mental Health America for more information and resources about Mental Health Awareness Month.

© Copyright 2015 GoodTherapy.org. All rights reserved. Permission to publish granted by