A decision by the Gauteng department of health has left at least 36 dead but has the scandal lifted the lid on the horrors of mental healthcare?

In June, Jaco Stols, 51, was doodling something that looked like a triangle except the lines didn’t really meet up. He jabbed his pen into the paper, giving the shape a halo of sharp, tiny dots.

Next to him, was his constant companion, one of two well–loved teddy bears he calls baba.

"My sissie kom vandag," he told Dianne Noyile, the head of a mental health organisation in Cullinan outside of Pretoria, where he lived at the time.

"He used to show the pictures to his sister [Sandra de Villiers] when she visited," says Noyile.

Teddy and De Villiers were Stols’s two most favourite things.

Stols was born with a severe intellectual disability and had the mental capacity of a 10-year-old. As he grew up, his family struggled to provide him with the 24-hour care he needed at home. After bouncing between mental health facilities, Stols came to the state–run Cullinan Care and Rehabilitation Centre 18 years ago. The centre has been caring for patients for about 40 years, according to the Gauteng department of health.

When De Villiers came to visit – teddy bear in hand – Stols would run into her arms and ask if she had brought him a treat, Noyile says.

"I have two teddy bears. Every time I visited him, I gave him the clean one and took the other one home to wash," de Villiers told Bhekisisa on the phone. "We would chat and take selfies with my phone."

She pauses. Stols often launched into "Amazing Grace" or “As Hy weer kom" (an Afrikaans hymn).

"He always wanted to know when I would come again. That was the most important question he would ask," his sister remembers.

But earlier this year, De Villiers says she was told Stols would be moved from the centre to a ward on the same grounds, but operated by Noyile’s NGO, Siyabadinga.

"The social worker told us he must move because they didn’t have space for him and there were 300 people on the waiting list," she says.

A litany of errors

The centre may have been making room for new patients like 28-year-old Sizwe Hlatshwayo. Hlatshwayo was one of about 2 000 long-term, state-funded mental health patients removed from privately-run Life Esidimeni facilities in greater Johannesburg earlier this year. Their move followed the Gauteng department of health's decision to terminate its contract with the private hospital group Life Healthcare as part of "cost containment" measures.

In June 2015, Gauteng health MEC Qedani Mahlangu announced patients would be sent home or placed in the care of community-based nongovernmental organisations. Civil society groups like the South African Depression and Anxiety Group, the SA Federation for Mental Health and the South African Society of Psychiatrists fiercely  opposed by the move. Many of the community organisations identified by the department lacked the ability to care for severely ill patients that needed high-level care, groups said.

Several of the groups unsuccessfully sought a Johannesburg high court interdict to halt some of the patient transfers with the help of public interest law organisation  Section 27.

At least 36 of the transferred patients have since died, according to Mahlangu. But this week the Democratic Alliance claimed the number is as high as 60.

Hlatshwayo was transferred from Life Esidimeni to the Anchor Centre, also in Cullinan, one of two NGOs that had taken over about four wards on the grounds of the Cullinan centre. He died in September, just two months shy of his 29th birthday.

Hlatshwayo’s mother says the family was only notified of his death a month later because the Anchor Centre had strangers listed as his next of kin. The Hlatshwayos are one of several families of former Life Esidimeni patients that allege their loved ones were relocated to new care facilities without their patient files, IDs or SASSA cards.

To make room at the government’s Cullinan Rehabilitation and Care Centre, Stols was transferred into the care of Siyabadinga, which shared the wards with the Anchor Centre. While de Villiers says her brother was happy there, Stols was sent back to the Cullinan centre after the provincial department of health discovered Siyabadinga was unlicensed.

Siyabadinga CEO Dianne Noyile says she had submitted the necessary paperwork to license the organisation and that the department of health had even interviewed its professional nurse. Mahlangu admits visiting Siyabadinga and the Anchor Centre sometime before early August.

Bhekisisa asked Steve Mabona, the Gauteng health department’s spokesperson, why the department did not know Siyabadinga was unlicensed. He responded: "The CEO [of the Cullinan Care and Rehabilitation Centre] was suspended for the said action."

The Anchor Centre is no longer caring for patients.

But Noyile says that at least three of about 70 patients transferred out of her care and back to the Cullinan Care and Rehabilitation Centre have died. 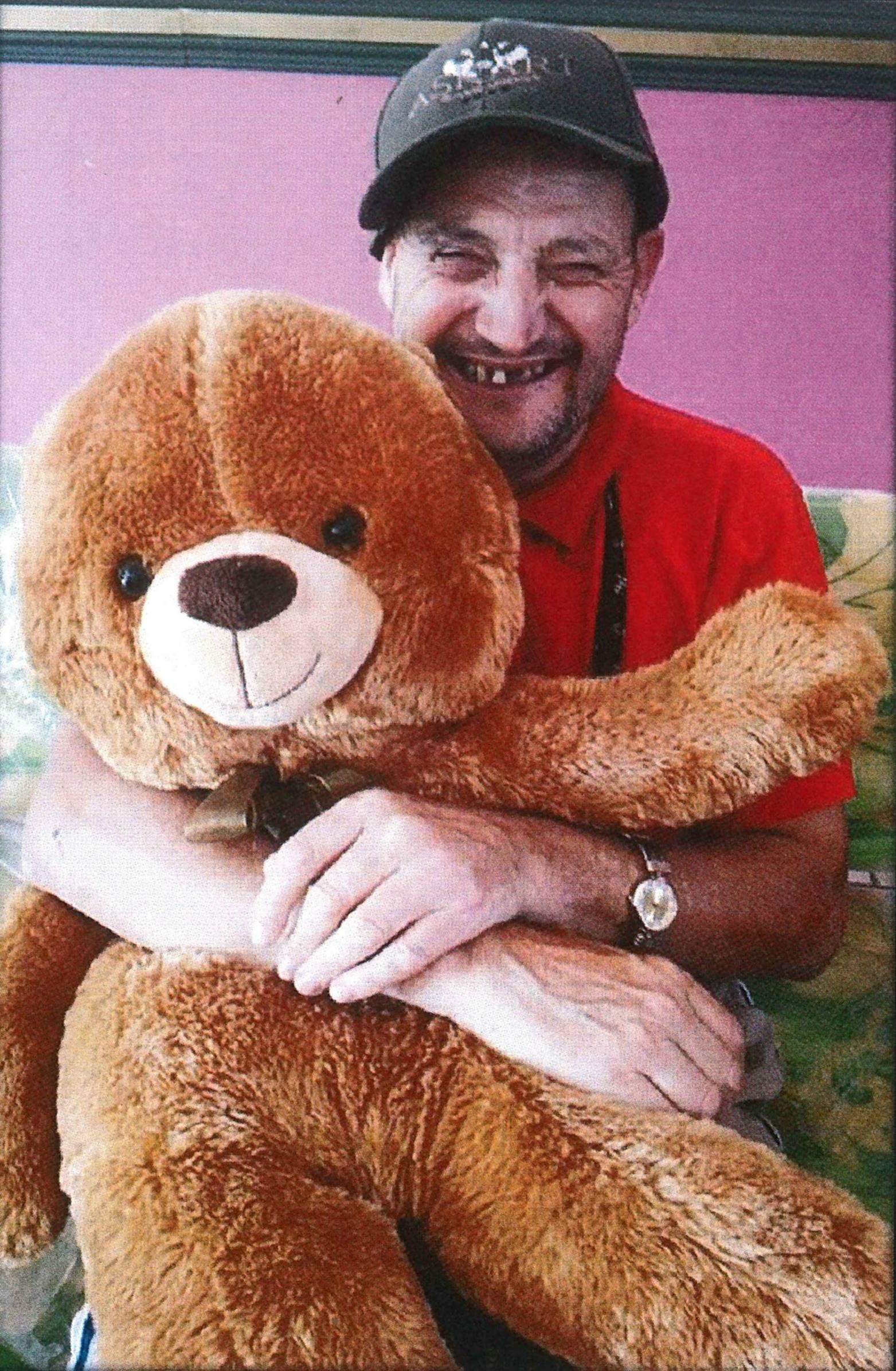 Jaco Stols was transferred back to Cullinan after it was discovered he had been placed at an unlicensed care organisation. (Supplied)

After Stols returned to the Cullinan Care and Rehabilitation Centre, de Villiers says he took a turn for the worst as she saw a marked shift in the quality of care provided by the centre.

"Every time I went there, he looked worse but every time I called, they’d say, "No, he’s fine". In the last few months, I cannot even go into the wards to take him his teddy bear. I don't know if they were hiding something," she says.

Then Stols told her a staff member had hit him.

Concerned, de Villiers took him in mid–September to a private doctor who found that he was dehydrated and thin and prescribed him medicine. The doctor also noted cuts and bruising on Stols's back, head and thigh. The abrasions were concerning enough to prompt the doctor to take photos of the injuries and complete a formal report. De Villiers and a family member laid a complaint with the centre and the staff member who Stols named as his alleged abuser eventually disappeared.

But de Villiers says the centre refused to fill the private doctor’s script or follow his advice that should Stols’s condition not improve within three days, he be rushed to hospital. In the next month, Stols would be in and out of Mamelodi Hospital. He was emaciated and struggled to breathe as his eyes fluttered and rolled back into his head. He no longer recognised his sister.

"The doctor at Mamelodi who admitted him told us that Cullinan has done all the damage. His brain functioning has [decreased] because of the dehydration.

"A person who can’t stand up for himself and they treated him like you don't even treat a dog. For me, it's so …"

Mabona says that a multidisciplinary team spent three months medically clearing Life Esidimeni patients prior to their removal. He adds that the department has requested patient files from Life Esidimeni and these are being transferred to NGOs weekly.

On October 27, at 8:30am, activists and families of deceased Esidimeni patients sat in a circle in the church hall of the Old Victor Church in Jeppestown in downtown Johannesburg.

Families called out the names of the dead aloud. Mothers wailed while others sat with their heads bent, forefingers and thumbs squeezed tight against their eyes to stop the tears.

Bishop Paul Verryn led the group in a closing prayer.

Today, we want to pray for those who have been so deeply abused and violated, he prayed.

"We want to pray for Qedani Mahlangu, and we want to ask that tonight when she goes to bed … these faces will come before her in their brokenness and she will not be able to find peace until her conscience wakes up and she repairs the damage that she has done."

A day later, a handful of cars arrived at the yellow face NG Kerk Rooihuiskraal in northern Johannesburg. It was Jaco Stols’s memorial. He died on October 15.

Inside, out of the blazing sun, was a single bouquet of flowers, two white candles and baba.

In the centre of the stage at the front of the church, there was a picture of Stols holding a giant teddy bear, his eyes squeezed tightly shut, smiling ear-to-ear. About 20 people – mostly family members – filled two pews.

In the front row, De Villiers sobbed quietly as the pastor read aloud a tribute she had written to her brother:

"How will I ever forget that little face when I came to visit and the smile and little hands that clapped with joy when they saw me? [You’ll] always stay like that [in our memories]."

"Our hearts are raw and broken … [but] your pain and suffering are gone. One day, we’ll see each other again."