They also have it really tough. 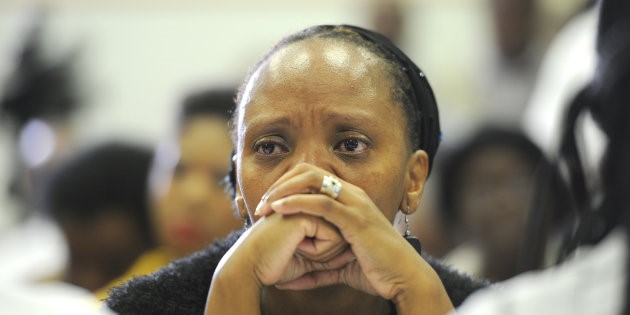 Felix Dlangamandla/Gallo Images
Christine Nxumalo, a relative of one of the Life Esidimeni psychiatric patients who passed away.

"Bipolar 1,2, PTSD, personality disorder, meds, anti-depressants, rehab, psychologists, behaviour therapists..." you name it, we've been there, says Karien Reddy*. Reddy is a mother to a daughter with a mental health condition.

The Benoni-based mom, who was speaking at the Discovery and SADAG Mental Health Media Summit on Thursday, says it did not start this way. Her daughter was a textbook baby, sleeping, eating and pooping on cue, she says. By all accounts, she was a happy child, who had friends and did well at school.

"She changed," says Reddy. Her school marks dropped, her friends changed, she started getting into trouble at home and at school, started stealing and once got into a physical fight. Behaviours Reddy attributed to being a teenager. But it did not end there.

Although her daughter matriculated, she had difficulty keeping jobs. "Her tranquility was short-lived," says Reddy, until they later discovered her daughter's mental health illness. Reddy says as a family they have been through drugs, abuse, attempted suicide because of the mental health condition.

Although her daughter is doing relatively well now in a good facility, Reddy recalls how tough on the family it has been.

One psychiatrist told her: "Get on with your life. She's [her daughter] never going to change. Walk away."

She has also dealt with people who think "bipolar is an excuse for bad behaviour," and those who still think "depression is what you get when your cat has died because you are sad." As a mother, she has been criticised, called bad and weak, a mother who spoilt her child.

What people don't realise, she cautions, is how difficult it also is for the family of a person with a mental health condition. Although she considers herself a relatively strong woman, "I used to watch rubbish tv to try to take my mind off it all," she says. "You are constantly in flight or fight mode, anxiously waiting for a [bad] phonecall," Reddy says.

And it is for these reasons that Reddy strongly believes families of mental health sufferers also need support. Otherwise, these families also risk becoming mentally ill, for example being depressed, because of how mentally tough it is for them to deal with their mentally ill family members.

"We just want to be heard and understood," Reddy says.

She is also delighted that for the first time ever, family support groups for families with mentally ill members will now meet at Life Glynnview hospital.

* name changed at the request of the family