A sudden rush of crushing, paralyzing fear. With no warning, no apparent reason, it hits and you’re powerless to stop it. This is not just stress or nervousness – it’s a panic attack and can have very real and serious consequences.

Physical symptoms like heart palpitations, dizziness, nausea, tingling, and chest pains seem to come out of nowhere, from harmless situations like driving or sitting in a movie theatre, even while sleeping. Some researchers believe that when our brain's normal mechanism for reacting to a threat - the "fight or flight" response - becomes inappropriately aroused, the result is a panic attack. “Nausea, jelly legs, irritability… I didn’t know what was happening”, says Peter Matlahaela, a panic sufferer and now a Support Group Leader in Mamelodi.

There is such misunderstanding around Panic Attacks and Panic Disorder, and stigma and shame involved, that the South African Depression and Anxiety Group (SADAG) has a day on the national health calendar dedicated to raising awareness of this debilitating, yet treatable, condition. Panic Awareness Day is on Monday the 10th July and SADAG encourages anyone who suffers from panic, or thinks they might, to get in touch with them. “Panic is terrifying and so many people are still ashamed and believe it is due to person weakness”, says SADAG’s Director Cassey Chambers. “This is not true. Panic is an illness - and can be treated.” SADAG offers FREE telephonic counselling, referral to expert’s resources and support groups nationwide, as well as offers talks to communities, schools, and corporates. For more information, please contact SADAG on 0800 20 50 26, or visit www.sadag.org.za. , where both Dr Linde and Director Zane Wilson have online videos on how to cope.

The panic attack itself is not dangerous, terrifying definitely, but not physically dangerous. “Most people who experience panic attacks feel as if they are going crazy or are out of control”, says Johannesburg-based anxiety expert psychologist Dr Colinda Linde. “Most people feel anxious about the possibility of having another panic attack and avoid situations in which they believe these attacks are likely to occur.” And this is where the danger comes in - anxiety about having another attack, and the avoidance it causes. For example, someone who has had a panic attack while driving may be afraid to get behind the wheel again, even to drive to the local supermarket. Panic attacks may occur at night resulting in disturbed sleep as the person awakes in a state of terror. The experience is so distressing that some people who have nocturnal panic attacks become afraid to go to sleep and suffer sleep deprivation and exhaustion. “People who develop these panic-induced phobias tend to avoid situations they fear will trigger a panic attack, and their lives may be increasingly limited as a result”, says Dr Linde. Some people with extreme cases of panic develop agoraphobia – a fear of going outdoors – due to the belief that by staying inside, all panic-provoking situations can be avoided.
When people who suffer from panic disorder try to avoid situations that may trigger an attack, the consequences can be far-reaching. Their work may suffer because they can't travel or get to work on time. Relationships may be strained or marred by conflict as panic attacks, or the fear of them, rule the affected person and those around them.
A recent American study showed that people who suffer from panic disorder are more prone to alcohol and other substance abuse, spend more time in hospital emergency rooms and feel less emotionally and physically healthy than non-sufferers, spend less time on hobbies or sports, tend to be financially dependent on others, are afraid of driving more than a few miles away from home, and have greater risk of attempting suicide.
Treatment of course is often holistic, and it won't work overnight, but if you stick with it, you should start noticing improvements within a few sessions. Cognitive Behavioural Therapy (CBT) focuses on identifying, confronting and testing negative and automatic thoughts and assumptions with reality, and brings about a more realistic way of thinking about fearful situations, and challenges anxiety-provoking thoughts and feelings. “Thanks to SADAG and CBT, I know that I can feel the fear, but I remember it’s just a panic attack and tell myself that I am safe”, says Peter. CBT generally requires 8 to 12 sessions. This therapy has a low relapse rate and is effective in eliminating panic attacks or reducing their frequency.

Going for CBT therapy, learning self-help tips, joining a Support Group and learning more about Panic can help you take back control of your life, says Zane Wilson. 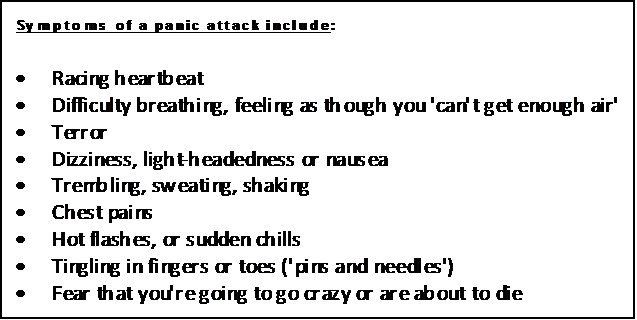