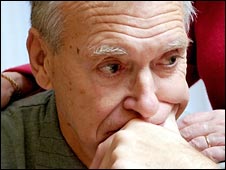 An estimated 750,000 people in the UK suffer from a form of dementia

Having depression may nearly double the risk of developing dementia later in life, new research suggests.

Experts know that the two conditions often co-exist, but it is not clear if one actually leads to the other.

Now two studies published in the American journal Neurology suggest depression does mean dementia is more likely, although they do not show why.

And the researchers stress that the findings merely reveal a link, not a direct cause.

They say more studies are needed to find out why the two conditions are linked.

They believe brain chemistry and lifestyle factors like diet and the amount of social time a person engages in may play a role.

Dr Jane Saczynski of the University of Massachusetts, who led the first of the two studies, said: "While it's unclear if depression causes dementia, there are a number of ways depression might impact the risk of dementia.

"Inflammation of brain tissue that occurs when a person is depressed might contribute to dementia. Certain proteins found in the brain that increase with depression may also increase the risk of developing dementia."

By the end of the study, 164 of the people had developed dementia.

The second study, meanwhile, followed 1,239 US people and looked at the number of times a person experienced depression related to their risk of dementia.

It showed that the more times someone experienced depression, the higher their dementia risk was.

Having two or more episodes of depression nearly doubled the risk of dementia.

Rebecca Wood, chief executive of the Alzheimer's Research Trust, said: "Similarities in symptoms between dementia and depression can mean the two are sometimes confused at time of diagnosis, but we don't know if they are biologically linked.

"These latest studies suggest that there may be profound connections between dementia and depression so we must expand the research to find out more."

Professor Clive Ballard of the Alzheimer's Society agreed that more research was now needed to establish why the link exists.

"It is well known depression is common in early stages of dementia. What this study demonstrates is that depression at a younger age is probably a significant risk factor for dementia," he said.